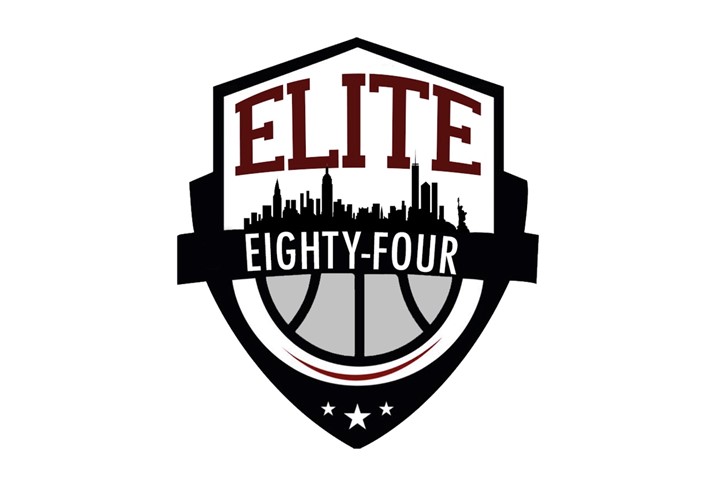 Elite 84 is a AAU basketball program based out of Bedford Stuyvesant in Brooklyn, NY. Head coach, Joel Velasquez says Elite 84 educates and empowers their athletes to be leaders, winners and students by developing the skills necessary for success in high school, college and life. Over the course of Velasquez’s coaching career, he has been able to help his student athletes get accepted into four-year colleges, not only for sports but with a focus on furthering their education.


Jaheem Tyson (2021) 6’5 small forward, Vision Academy NY -Tyson is using his AAU work and his next two seasons at Vision Academy to make the move from high school post man into a college swing man. He already plays above the rim and is a tremendous rebounder. His progression to the next level is now tied into his desire to grind and add perimeter skills in the practice gym. The success in that progression is hard to predict, and is totally up to Tyson. Scouts will be watching, and where he lands on the D2 to mid major spectrum will depend on it.

Ronald Williams (2021) 6’1 point guard, Vision Academy NY - Williams is a tenacious on-ball defender and team defender. To the point, he has earned the “Pat Bev” nickname from Elite 84 Coach Anthony Bonilla, in honor of the famed Los Angeles clipper defender, Patrick Beverly. He rebounds the ball well for size and can finish off offensive rebounds. He is the prototype “New York City guard” in that he needs to get into a practice gym to improve his jumper in order combine that with get his high motor strengths and get to the next level. Coach Velasquez thinks that Williams can be a great role player on a D2 team or can be one of the best players on a good D3 team.

Justice Davis (2021) 6’2 guard, William C Bryant High - Davis is a slashing guard who plays with a lot of energy on both sides of the court. He loves to play at and above the rim. Even at his size, he finishes strongly at the rim and doesn’t shy away from the contact. When Davis improves his decision-making, he will become a true point guard. Currently, he is much better off-of-the-ball. He’s a player who is going to need one or two years more work at a JUCO before evolving into a D2 level player.

Zaphian “Zay” Scott (2022) 6’4 guard, Boys and Girls High- Scott is a tremendous player on both sides of the court. He plays the game with a high motor and has amazing basketball IQ. His ability to guard both guards and wings makes him a special player. He is able to get to the rim with ease and finishes above the rim through contact. His 1st and 2nd jump makes him an excellent rebounder as a guard, being able to get the rebound and push the ball for easy outlet passes. Scott needs to improve his jump shoot and his handle a bit, but if he improves those areas of his game there isn’t a D1 or D2 coach that wouldn’t love him on there team.

Myles Day (2021) 6’4 wing, Boys and Girls High - Day has a lot of potential to be really good with his size and his ability to play against wings and guards. He’s a good rebounder and can score off of second chance points. For him to get to the next level, Coach Velasquez says that Day needs to improve on his motor and his shooting. If he gets that done, Velasquez thinks that Day will be a great D3 player, or a solid role player on a good D2 team.

Omari Frederick (2021) 6’4 guard Canarsie Campus- Frederick is one of Elite 84’s best players coming into this season. He’s a tall lanky guard with true court vision and has the ability to get to and above the rim at will. He’s a gritty defender and takes pride in playing both ends of the court. Frederick’s biggest focus this season is improving his jumper and becoming a true floor general in order to make his teammates better. Omari is a qualifier and might go the Post Grad route in hopes to get more interest from some HBCUs.

Alpha Bah (2021) 6’2 guard, Canarsie Campus - Bah is the definition of a sharpshooter. As hard as he works on the court, he works in the classroom as well. He is a qualifier. With improved creativity off the dribble, Elite 84 is going to be leaning on him to both score and create for others.

Aaron Parker (2021) 6’5 swing, Seward Park - Parker is a lengthy and lean stretch 4 man who can knock down the three and works well in a pick and pop situation. He can and will score the ball with a solid mid-range game.  He must improve strength and athleticism around the basket, but has a high ceiling to do so.  Parker is a good rim protector and rebounder who turns defensive rebounds into full court assists for wing players. He also needs to improve his perimeter ball handling.

Darryl Williams (2021) 6’2 guard, Nazareth High - Williams is a great leader for his team and is a very athletic guard who plays with a lot of energy and can finish at the rim. He is not yet a true point guard in his instincts and habits. I.e, he currently does much better off-of-the ball. The Elite 84 staff thinks that he needs to improve on his shooting and become a better passer if he wants to maximize his opportunities. They feel that he should progress to becoming a great player on the D3 level or good role player on the D2 level.

Jaden Pena (2021) 6’6 wing, Xaverian High. Pena’s ability to play both the wing and guard is a huge advantage. He loves to play above the rim and has the ability to stretch the floor by consistently hitting the 3 ball. Holds some D1 interest, and is using this spring to finalize his decision.