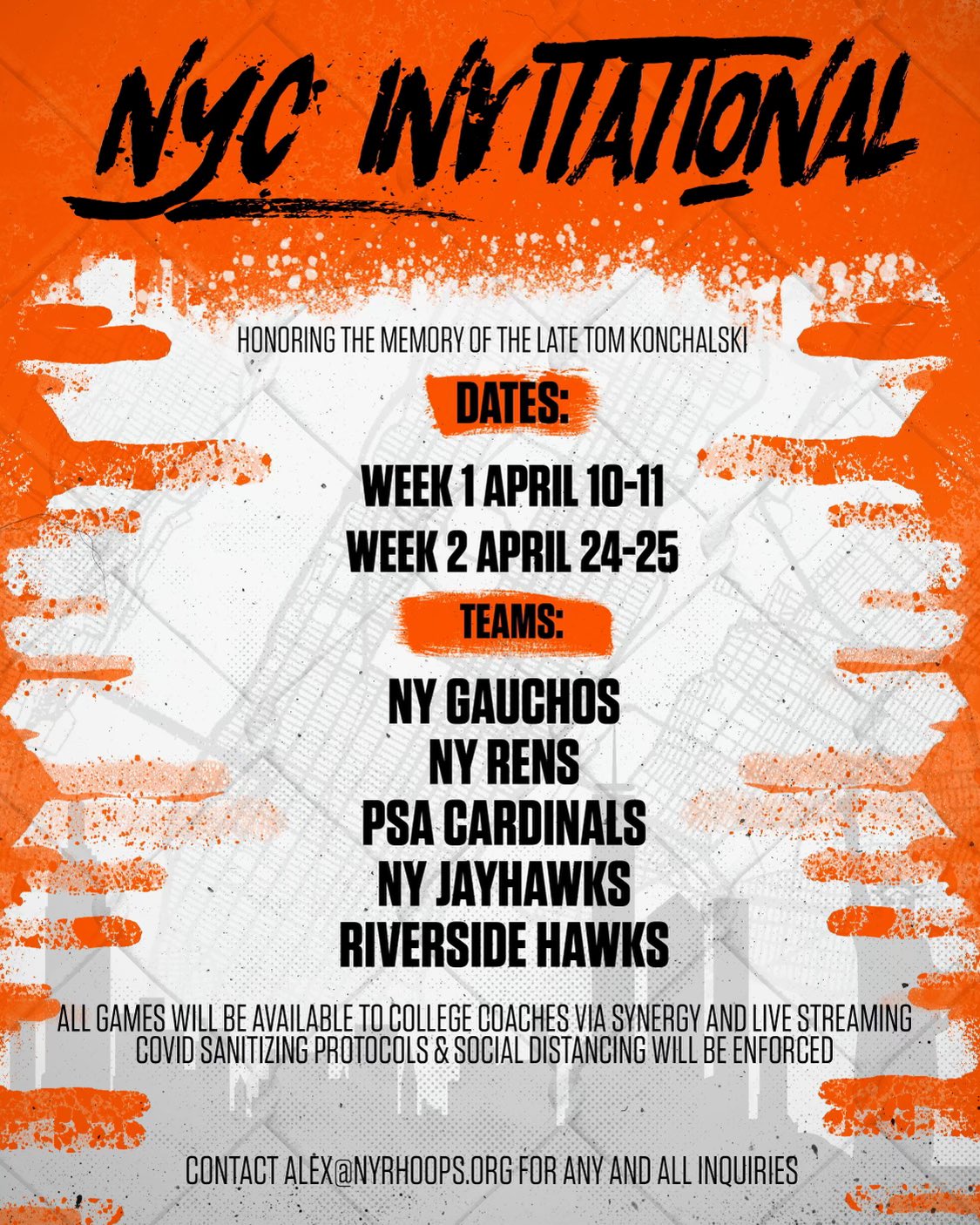 On Saturday, RecruitTheBronx.com took advantage of its invite to visit the famous Gauchos Gymnasium in The Bronx for the NYC Invitational games. The event brought together five of New York City’s finest AAU programs,  the New York Rens, New York Gauchos, PSA Cardinals, Riverside Church and the New York Jayhawks. Accordingly, his event showcased some of the finest players in the Tri-state area. The effort was also a tribute to memory of the late, great talent evaluator Tom Konchalski.

Here are the standouts from the event:

Terry Copeland, 6-8, Forward, Bergen Catholic High School, PSA Cardinals 15U, Class of 2024 - A forward that has a very strong presence in the low post and can dominate smaller players in the paint. Is a player that can score with ease and can get plenty of rebounds in the process. Has the ability to run in transition with guards.

Johnuel Fland 6-3, Point Guard, Archbishop Stepinac High School, PSA Cardinals 15U, Class of 2024 - A guard that knows how to control a team and is very poised. Never gets rattled when the defense is coming. Knows when to pass and when to score . Has a nice shooting touch from long range & has good defensive tendencies.

Abraham Rosario 6-8, Forward, Evangel Christian School, PSA Cardinals 15U, Class of 2024 - A forward that has good hands and uses his size and hands as an advantage. Is a player that can play above the rim and is fearless when in the lane. Is always alert and ready to block a shot when the opposition is on its way to the basket.

Jaiden Glover, 6-4, Shooting Guard, St. Benedict’s Preparatory School (NJ), New York Rens 15U, Class of 2024 - A guard that has plenty of length and is able to finish at the basket. Knows when and where to penetrate when it comes to going to the basket. A player that plays with plenty of energy when he’s on the floor.

Preston Edmead 5-10, Point Guard, Deer Park High School, NY Jayhawks 15U, Class of 2024 - A guard that is very deceptive with the ball when on the fast break. Knows when to pass to his teammates and also when the best time to score is. Has good hands, which makes him able to get steals, which will in turn help him either get to the basket or get him an assist.

Nigel James 5-9, Point Guard, Fessenden School (MA), New York Rens 15U, Class of 2025 - A guard that has a diminutive stature, but plays bigger than his frame. Knows how to switch the tempo on offense and gets his teammates to adapt to his speeds. Is able to get steaks at all times.

James Moore 6-8, Forward The Patrick School (NJ), New York Rens 15U, Class of 2024 - A forward that has a long wingspan and is able to dominance against smaller defenders. Is able to bring the ball up and down the court in a timely fashion. Is able to create for himself and is great at rebounding.

Jayden Lemond, 6-1, Point Guard, Blair Academy (NJ), PSA Cardinals 16U, Class of 2023 - A guard with plenty of energy on the court and has a lot of athleticism. Has excellent court vision and knows how to facilitate to his teammates at all times. Is great at making sure his teammates are in the right positions at the right times.

Jayden Reid 5-11, Point Guard, Long Island Lutheran High School, PSA Cardinals 16U, Class of 2023 - A guard that can space the floor and make plenty of plays on the floor. Is a player that can create for himself offensively & can make plenty of big shots when the right opportunity presents itself. Sees his teammates at all times and gives them passes at the right moments.

Will Franks 6-8, Forward, Northfield Mount Hermon School (MA), Riverside Church 16U, Class of 2023 - A forward that can push the ball up the court and is able to see the floor when on the fast break. Is able to create for himself on offense and knows when to give his teammates the ball at the right time. Is a great rebounder that uses his strength to edge out the opposition.

Brandon McCreesh 6-4, Shooting Guard, Hotchkiss School, Riverside Church 16U, Class of 2023 - A guard that is very energetic on the floor and has a nice shooting touch and can see the floor at all times. Knows when to get open and can anticipate when he’s going to be able to be shoot. Is able to attack the lane.

Pape Fall 6-9, Forward, Bridgeport Preparatory School, New York Gauchos 16U, Class of 2023 - A forward that is a very strong and imposing figure in the low post. He is very mobile and has a large frame that can be very intimidating to smaller defenders. Knows when to use his hands in order to alter the shot of the opposition and can also get rebounds on both ends of the court. Is a player that can dominate the offensive end.

Prophet Fields 6-3, Shooting Guard, Salesian High School, New York Gauchos 16U, Class of 2023 - A guard that is very smart when it comes to passing the ball and making plays on the court. Is very shifty and can make great plays when driving to the basket all times. Knows when to give his teammates the ball and is able to get past the defender with ease.

Muazibini Jabal Amina, 6-10, Forward, First Love Christian Academy (PA), New York Jayhawks 16U, Class of 2023 - A forward that is a dominant force on both ends of the floor. Is great at sealing the lanes and is great at making sure that he is alert when the opposition puts a shot up so that he can block a shot. Is an enforce that can dominate at the rim.

Jaden Daughtry 6-5, Shooting Guard, St. Francis Preparatory School, New York Jayhawks 16U, Class of 2022 - A guard that is a great at facilitating and making sure that his teammates can get baskets. Is a player that has plenty of explosion in his offensive game and is able to play above the rim. Has the ability to be active for the ball when it is loose or when he is getting rebounds. Knows when to take much-needed shots, especially when his team may be down or in cruicial moments.

Maurice Odum, 6-2, Point Guard,Union City High School (NJ), Riverside Church 17U, Class of 2022 - A guard that has toughness, poise tremendous quickness as well as a penchant for scoring in transition. His speed and defensive posture allows him to get steals and defense and run a team in transition. Is able to see where his teammates are moving and pass them the ball. When it comes to scoring, he is able to blow by defenders and get to the basket with no problem. Is fearless when getting to the rack.

Adam Silas, 6-2, Point Guard, St. Thomas Aquinas High School (NJ), New York Jayhawks 17U, Class of 2022 - A guard that can make his presence felt on the floor and is able to space himself out on the floor to free up shots for himself. Is a playmaker that can see where his teammates are moving at all times and knows where & when to hit them with passes that can lead to baskets.

Raynor Torres, 6-8, Forward, The Patrick School (NJ), New York Gauchos 17U, Class of 2022 - A forward that is very versatile and can make plenty of noise in the post area. Is able to seal the post and uses his strength to impose his will in the paint. Can put the ball on the floor and can make hook shots when going up to score. Is a solid rebounder and shot-blocker.

Christian Fermin, 6-10, Forward, Pocono Mountain West High School (PA), PSA Cardinals 17U, Class of 2022 - A forward that is a physical specimen and can dominate in the paint area. Has great hands in the post and can make his presence felt when it comes to getting rebounds or blocking shots. Is able to play above the rim & has the ability to score in multiple ways.

Denver Anglin, 6-1, Point Guard, Gill St. Bernard School (NJ), New York Rens 17U, Class of 2022 - A guard that is known as a playmaker and is great at to creating for himself offensively. Has great athleticism in his game and finds multiple ways to score. Has great hands on the defense and is prone to getting steals off of the opposition.