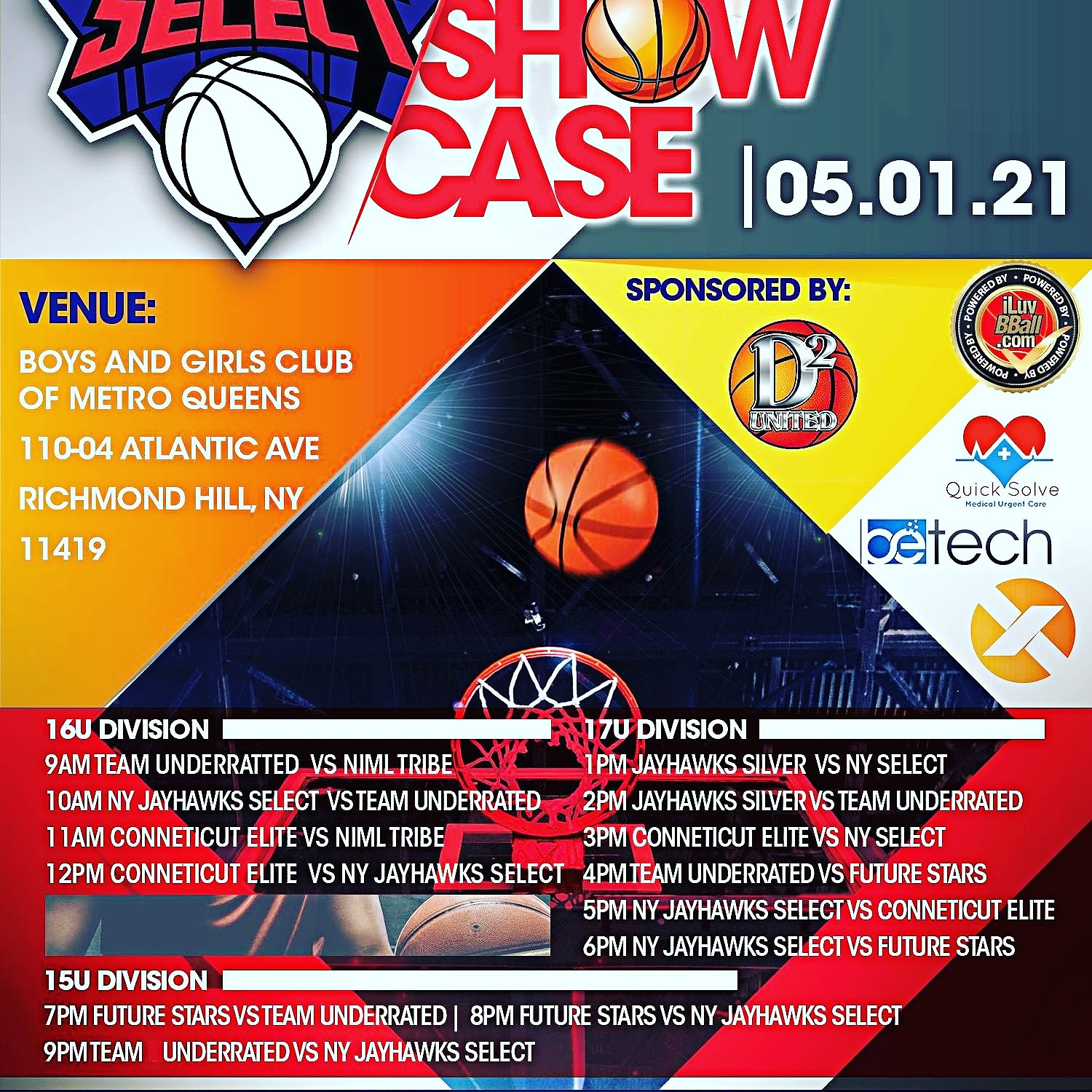 This year they brought in New York Select, New York Jayhawks Select, New York Jayhawks Silver, NYC Future Stars, Connecticut Elite, NIML Tribe and Team Underrated programs to play each other. Each program had a team play in each of 15u, 16u and 17u levels. There were several college coaches in attendance, hailing from Oklahoma, New York, Massachusetts, Connecticut, Pennsylvania New Jersey, New Hampshire and Kansas. Not being held during a D1 Live Period, D1 schools could not attend in person, but D2, D3, NAIA, JUCO level colleges were there. For the D1s and any others that could not make the trip, the games were on livestream and posted to the NY Select YouTube channel.

They named players the Most Valuable players of each game. Here are those players:

Quame Smith (2021) 6’6 forward, New York Select - Smith drew a lot of attention from several colleges in attendance, showing off his athletic lefty talent. He scored 15 points in both games he played. He also contributed on the offense boards and on defense.

Steven McGriff (2022) 6’4 swing, New York Select- McGriff also drew a lot of attention from college coaches who attended and watched on live stream. He matched Smith with in left-handed talent and by also scoring 15 points in each of his two games.

Micah Morgan (2023) 6’1 guard, Connecticut Elite - Morgan also created a new level of college coach following for himself. He defended well. He landed shots from all over the court, including getting into the paint and involved his teammates.

Jordyn Davis (2022) 6’4 swing, Connecticut Elite - David drew attention with his determined defense, by playing hard, scoring and helping his team the best he could.

Max Weinberg (2021) 6’2 guard, Team Underrated- Weinberg showcased how he could shoot the ball and score in the paint.

Jasigha Barnes (2021) 6’2 guard, New York Jayhawks Select - Barnes played very hard for the Select squad. He led the team to a comeback win, scoring when they needed him too. As hoped for, he drew several looks and now has interest from several schools.

Todd Rochelle 6’1 guard, New York Jayhawks Silver - Rochelle lived up to his well-deserved rep. He was one of most standout guards, and drew a lot of coaches to tune in to the live stream. They liked how he ran the point, shot the ball and played tough defense. He also had the lefty’s advantage, athleticism and skills to make his team better.

Shawn Fulcher 6’0 guard, NYC Future Stars - Fulcher reinforced his deep RecruitTheBronx.com accomplishments resume with his standout play. He is a guard who did a little of everything on the court. He definitely drew a lot of attention from the schools there in person and on the livestream.

Jaden Pena (2021) 6’6 wing, NYC Future Stars - Pena also brings a long and impressive RTB profile with him to every game. He did not disappoint the schools that watched him in this event. It was easy for them to like Pena’s ability to shoot, score and play defense.

Ian Belfon (2023) 5’10 guard NYC Future Stars- Belfon drew some new followings by showing his tough guard ability by playing defense and helping his team to win their game in the showcase.

Nathan Andrice (2022) 6’6 wing, New York Jayhawks Silver - Andric was skilled and athletic in the paint and dominated the boards.

Elijah Bailey (2022) 5’11 guard, NYC Future Stars - Bailey, who played for Vision Academy’s National Team in the winter, scored the ball from everywhere, outside, blow-by lay-ups, floaters and mid-range. He played both the point and off the ball for the NYC Future Stars.

Ke’Andre Penceal (2021) 6’2 guard, Team Underrated - NYS apparently tried to round up all of the high talent lefties in the region for this showcase. Penceal is also a very talented southpaw. He is a strong guard with a good jump shot and is a strong finisher at the basket. He has spent his winter in Northern CT as a post grad, honing his skills against his fellow national prep powerhouse teammates and their high level oppopnents at Putnam Science Academy. He’d be a All Conference level player for any D2 program.

Luke Nieman (2023) 6’0 guard, Connecticut Elite - Nieman enjoyed the opportunity to bring his big Connecticut rep into a City gym. He definitely stood out in the 16u division, by shooting and scoring the ball from all angles. He is a player to watch in the Class 2023.

Noah Touissant (2023) 5’10 guard, New York Jayhawks Select- Toussaint is another guard who stood out at the 16u division, showing he could contribute by running point, scoring and playing defense.

Justin Chatelain (2024) 6’5 forward, New York Jayhawks Select - Chatelain is showed that he is headed toward being to be a great player for the 2023 Class. He shows a lot of athletic skills and contributes to the team in multiple ways.

Jayden Haywood (2023) 6’0 guard, Team Underrated - Heywood is another tough guard from Long island who showed his toughness in his both his ability score and defend.

Tavion Jennings (2023) 5’8 guard, Team Underrated - Jenning showed a lot of skills that he is developing. He will be creating problems on the courts of Long Island for years to come.

Shane Turner (2023) 6’5 forward, NIML Tribe Turner has great hands and is a good finisher around the basket. Great defender and rebounder. He makes good decisions with the basketball, and will continue to improve as he grows athletically. Turner plays with a ton of confidence.

Kevon Clarke (2023) 6’2 guard, NIML Tribe - An aggressive guard who can score inside with a soft touch and from mid range.  Good ability to rebound, and he always competes. Plays with a ton of confidence explaining why his recruitment been so active despite being in 10th grade.

Rahleek Murray (2024) 6’0 guard, Team Underrated - Williams shows a lot of ability for his class and is a player to be watched and is going to stand out in the next few years.

Chad Wesley 5’10 guard, New York Jayhawks Select - Wesley is an up and coming guard who is going to be a tough player in the coming years. A player to be watched for the Class of 2024.

David Johnson 6’1 guard NYC Future Stars - Johnson is a strong guard who has a lot of potential to be a standout player for his class.