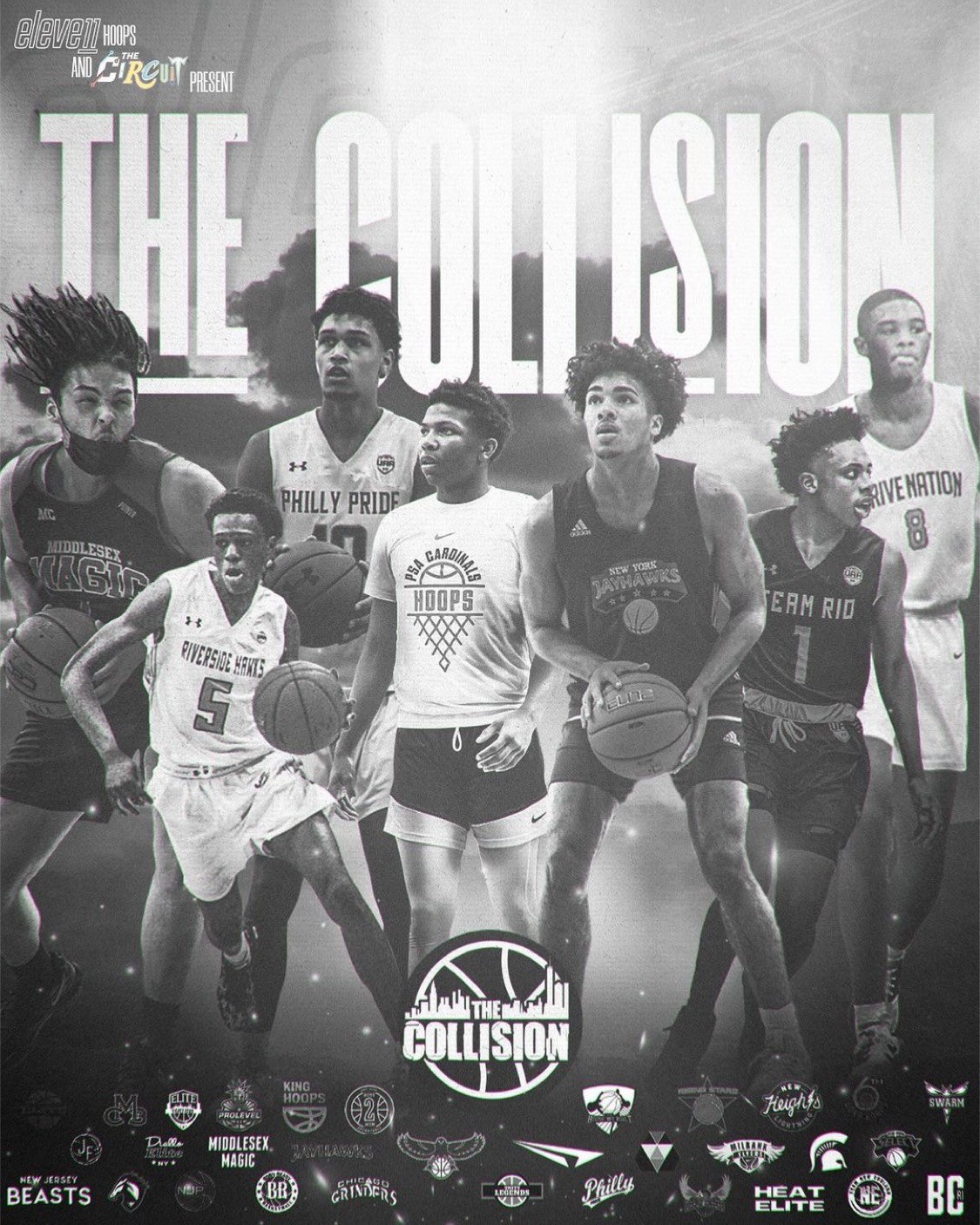 On Saturday, June 6, RecruitTheBronx.com paid a visit to Riverbank State Park for The Collision, an event put together by Eleve11Hoops. In this event, all teams in the 17u division played in bracket play. The Milbank Flyers went on to win the championship. There were plenty of strong teams within the Northeast that played against one another.

Jayden Pierre, 6-0, Point Guard, Long Island Lutheran High School, Team Rio University, Class of 2022 - A guard that knows how to use his speed to his advantage, especially when going at the other end of the court. Has a penchant for scoring at will and can sometimes be difficult for the opposition to contain. Has the ability to set his teammates up for baskets when it comes to getting assists.

Ben Roy, 6-2, Point Guard, Manasquqn High School (NJ), Team Rio University, Class of 2022 - A guard that has the ability to do many things on the offensive end of the floor. Has a nice feel for the game, as he is a player that can shoot at a high volume. Knows when to kick it out to his fellow teammate and when to take a clutch shot.

Derrick Bueno, 6-7, Forward, Roselle Catholic High School (NJ), Team Rio University, Class of 2021 - A forward that knows how to establish his presence in the low post and is a formidable threat when it comes to holding down the paint area. Is great with his physicality as he is able to absorb contact and finds ways to draw fouls and get to the free throw line. Knows when to step out of the paint area.

Dominick Campbell, 6-8, Forward, Phillips Exeter Academy (NH), Middlesex Magic, Class of 2022 - A forward that has great footwork and skills and has plenty of strength in the post area. Is able to use his upper-body strength to corral rebounds and attack the glass. Is able to step out and shoot from long range and is good at playing above the rim.

Aidan Cammann, 6-9, Forward, Andover High School (MA), Middlesex Magic, Class of 2022 - A forward that has good size, yet is also able to put the ball on the floor and dribble like a guard. Has plenty of strength and uses it for great purposes, for example, to hold his own in the paint area when he is going up for rebounds and needs to box out. Has a nice shooting touch from 15 feet and will shoot jumpers when he’s not in the paint.

Mike Loughnane, 6-3, Shooting Guard, Boston College High School (MA), Middlesex Magic, Class of 2022 - A guard that is able to do major things when on the floor. Is a player that can take over a game with his scoring ability, as he’s able to get to the basket with a quick first step. When he is not heavily guarded, he can obliterate the competition with his game.

Jayden Brown, 6-0, Point Guard, Immaculate Conception High School (NJ), New Jersey Panthers, Class of 2021 - A guard that has the ability to get past the opposition and can get to the basket with ease. Has good hands on the defensive end and is able to get steals at all times and stays with his man. When directing a team, he is able to pass the ball and set his teammates up for baskets.

Brian Whitney, 6-3, Shooting Guard, Passaic Valley High School (NJ), New Jersey Panthers, Class of 2022 - A forward that thrives on his athleticism, as he is able to play above the rim on the offensive end and can show his dunking ability and also can run the floor well. When he’s going to the basket, he is very fearless and can absorb contact, which could lead to him drawing fouls and getting the free throw line. Has a penchant for shooting from the corner.

Phil Urban, 6-6, Forward, Pennington School (NJ), New Jersey Panthers, Class of 2022 - A guard with good size, he is able to get to the basket off the dribble and is able to use his length to overpower smaller players. Is able to shoot from long range and can be dangerous if he is not heavily guarded when he’s in the corner. Also has a nice floater in his repertoire.

Dior Davis 6-2, Point Guard, Murry Bergtraum High School, Milbank Flyers, Class of 2022 - A guard that has a lot of quickness and poise in his game and is able to control the tempo of his team when they’re on the fast break. Is very crafty and is able to make plenty of plays on the floor when he has the ball in his hands. Is a great distributor when it comes to passing the ball and has a good shot selection. Is a graduating senior who plans to do a postgraduate year at a prep school.

Tyler Hawkins 5-9, Point Guard, Mount St. Michael Academy, Milbank Flyers, Class of 2022 - A guard that is a good decision-maker on the floor and has great court vision when it comes to directing his team on the offensive end. Despite his diminutive size, he is fearless when driving to the basket & is able to absorb physical contact when driving to the hole. Is great at distributing to his teammates at the right moment.

Brandon Marks 6-2, Shooting Guard, High School of Construction, Pro Level Titans, Class of 2021 - A guard that has the ability that has plenty of strength and uses it to absorb contact when it comes to getting to the hole. Is fearless when it comes to going to the basket and being able to score. Has a nice shooting touch from the top of the key.

Dorian Paki 6-7, Forward, St. Joseph’s By The Sea High School, Pro Level Titans, Class of 2022 - A forward that is a very versatile player that can do many things on the floor. Is able to glide past his defender with his dribble and is able to use his strength in the post area to score. Is able to establish his position in the post area when it comes to him getting rebounds.

Jayshane Woodard 6-6, Forward, Wings Academy, Riverside Church, Class of 2021 - A forward with plenty of guard skills that can do a lot of things on the floor. Has the ability to handle the ball on the perimeter to create for himself off the dribble. Is able to use his large frame to post up on smaller defenders and uses his finesse to get to the basket and is known for shooting threes from long range. Is a graduating senior that intends to do a postgraduate year at a prep school.

Nicolas Pavrette, 6-11, Forward, Central Pointe Christian Academy (FL), Riverside Church, Class of 2021 - A forward that is a powerful force in the paint area. Is able to cut off the dribble and get up and dunk on the opposition. Has good size and is able to intimidate smaller defenders with his length and ability to block shots when the opposition is driving.

Maurice Odum, 6-1, Point Guard, Union City High School (NJ), Riverside Church, Class of 2022 - A guard that has toughness, poise and speed as well as a penchant for scoring in transition. His ability to stay on his man allows him to get steals on the defensive end and run a team in transition on the offensive end. Is able to see where his teammates are moving and can hit them with a pass as they’re streaking towards the basket. When it comes to scoring, he is able to blow by defenders and get to the basket with no problem.

Ryan Dunn 6-7, Shooting Guard, Perkiomen School (PA), New York Jayhawks, Class of 2022 - A guard that has plenty of size and can dominate when he has the ball in his hands. Has a good jumper from the corner and is able to use his athleticism when driving into the lane. Loves to accelerate and play above the rim when going towards the basket.

Jamarques Lawrence, 6-4, Shooting Guard, Roselle Catholic High School (NJ), New York Jayhawks, Class of 2022 - A guard that has a penchant for leading his team in transition and can make sure that his teammates get the ball at the right time. Is able to get open for the ball and can see where his teammates are moving and is able to get them good passes which lead to baskets. Has the ability to shoot jumpers from the top of the key.

Joshua Rivera, 6-7, Forward, St. Thomas Aquinas High School (NJ), New York Jayhawks, Class of 2022 - A forward that has the ability to play at a high level when he’s on the floor at all times. Is able to block shots when the opposition looks like they’re about to score. Is a player that loves to play above the rim and will dunk whenever he gets an opportunity. Is a graduating senior that intends to do a postgraduate year at a prep school. *