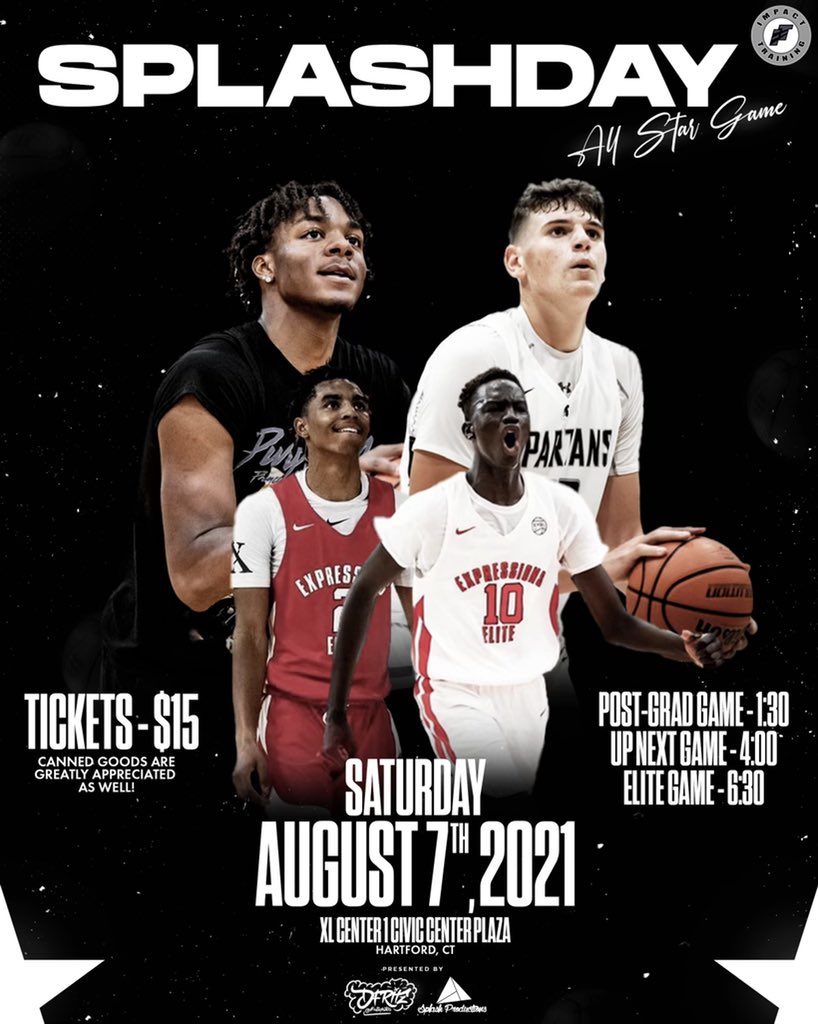 On August 7, RecruitTheBronx.com shot up to the XL Center in Hartford, Connecticut for the first annual Splash Day. This an an event organized by Splash Productions and CT Impact Training. There were three games played, the prep school game (graduating seniors going on to prep schools), the Up Next Game (freshmen and sophomores) and the Elite Game (which features some of the premier talent in the state of Connecticut and other states). Here are the standouts from the event:

Quron Zene, Jr 6-5, Forward, IMG Academy (FL), Class of 2022 - A forward that is very imposing and is very strong in the paint area. Is able to step out and handle the ball on the perimeter and can shoot from long range. Is very mobile and can play at least three positions on the floor.

Demir Kandic 6-11, Forward, Covenant College Prep (NJ), Class of 2022 - A forward that is a force in the paint, as he uses his height to overpower others in the post. Is a player that can make a hook shot and can obtain rebounds and kick them out to players that are on the run in transition. Is able to make putbacks when going up to score.

Mikey Blackman 6-1, Point Guard, Academy of Science and Innovation (CT), Class of 2022 - A guard that loves to run and uses his quickness to get to the basket. Is able to see the floor and put his teammates in position to score every time they go down the court. Is a player that has plenty of athletic gifts when it comes to playing above the rim.

Jarrell Petteway 6-2, Shooting Guard, Watkinson School, Class of 2022 - A guard that loves to run in transition and has a nice shooting touch. Is able to set his teammates up for passes and is able to get downcourt easily. Loves to run in the open court.

Jaidan Gilzene 6-3, Shooting Guard, Covenant College Prep (NJ), Class of 2022 - A guard that is very athletic and has good hands for snaring rebounds. Is able to drive to the basket and can absorb physical contact in the paint area. Is able to block shots when he sees the opposition going up for a basket.

Jack Hall 6-3, Shooting Guard, St. Thomas More School, Class of 2022 - A guard that is known for shooting from long range and is dangerous if not contained. Has a penchant for driving to the basket and can attack the lane with ease.

CJ Wilson 5-10, Point Guard, Woodstock Academy, Class of 2022 - A guard that makes plenty of hustle plays when he’s on the floor and loves to get after the ball. Is great at making sure his teammates get the ball in the right positions.

Jaden Martin, 6-2, Point Guard, Springfield Commonwealth Academy (MA), Class of 2022 - A guard that knows how to control the game for his team and can be a huge asset to his team. Is able to run a team in transition & knows when to kick it out to his teammates and is able to get down the court in a timely fashion. Is able to create for himself when it comes to him scoring.

Rhandyn Bair 5-10, Point Guard, Kingswood-Oxford School, Class of 2024 - A guard that is shifty and can get down the court easily and is a player that can do many things at his position. Is a great facilitator and can make sure that his teammates get the ball at the perfect moment. Is able to pull up for a jumper and can slice & dice his way to the basket for two.

Tyson Wheeler, Jr., 5-10, Point Guard, St. Bernard’s School, Class of 2023 - A guard that is able to penetrate into the lane and can attack the basket efficiently. Is a good facilitator, as he knows where his teammates are going, so that he can give them passes that lead to assists. Is fearless when it comes to absorbing contact when going up for a basket.

Alex Barber, 6-6, Forward, Paolo Freire Charter School (MA), Class of 2024 - A forward that has a long wingspan and plays tough when on the court. Has the ability to play above the rim, but can step out and handle the ball on the perimeter. Is fearless when going up for a basket.

Kingston Walker 6-5, Shooting Guard, Loomis Chaffee School, Class of 2024 - A guard with great court vision and is able to find ways to get his shots. Is great at handling the ball on the perimeter and is known for shooting from long range. Is a very athletic player and can get to the basket with ease.

Kamm Grant 6-6, Forward, Windsor High School, Class of 2024 - A forward that makes his presence felt on both ends of the floor. Uses his strength and long wingspan to corral rebounds and is always ready and alert for the ball when it comes his way. Knows how to absorb contact when going up for two.

Tayeshawn Pemberton, 6-2, Shooting Guard, St. George’s School (RI), Class of 2023 - A guard with a great handle and plenty of toughness when on the floor. Is a player that loves to play above the rim & doesn’t hesitate to show off his athleticism when he’s on the floor. Uses his strength to get rebounds and is able to get down full court.

Jaysean Williams 5-8, Point Guard, Bloomfield High School, Class of 2025 - A guard that has plenty of heart, as he will play tough defense on the opposition. Is a guard that is able to attack the opposition on the offensive end with strong drives to the basket. Is fearless when penetrating into the lane and is poised when going to the basket.

Jeremy Arnum, 6-4, Shooting Guard, Windsor Locks, Class of 2024 - A guard with a long wingspan that can bring the ball up and can score in bunches. Is able to shoot from any place on the floor and can put the ball on the floor. Is good at his shot selection, as he knows when to take certain shots at certain times.

Na’zier Williams 6-2, Classical High School, Class of 2024 - A guard that has the ability to play tough when in the post is very aggressive when going to the basket. Is fearless when going up to score and always looks to go to the free throw line.

Gavin Griffiths 6-7, Shooting Guard, Kingswood-Oxford School, Class of 2023 - A guard that is able to create for himself and loves to shoot at a high volume. Is very active on the perimeter and looks to shoot from long range. Has good passing instincts and has plenty of athleticism, as he will drive into the lane and go up strong to the basket.

Badara Diakite 6-10, Forward, Northwest Catholic High School, Class of 2025 - A forward that has a very high motor and can put the ball on the floor, and has a long wingspan, due to his length. Has great hands, which he uses to obtain rebounds and block shots. Is a force in the paint area and is very aggressive at the basket.

Darryl Simmons II, 5-8, Point Guard, Putnam Science Academy, Class of 2023 - A guard with a very high IQ that has excellent court vision. Is able to run a team efficiently and can get his teammates to score by setting them up with nice passes. Has a penchant for driving to the basket and also has the ability to shoot from the perimeter.