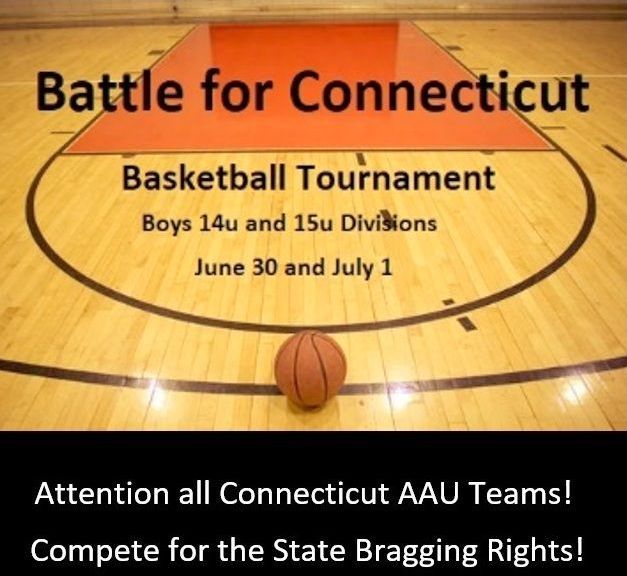 United Youth and TMT Directors Terrence Fuller, Chronne Rogers and Anthony Hill decided that for one busy summer weekend, they would not pack up their players and families and battle the I-95 traffic to go compete in a New York or Massachusetts based tournament. Instead, they put out thigsp Bat Signal to the multitude of Connecticut based AAU teams to gather in Norwalk at Brien McMahon High for their own tourney. Thus, the inaugral Battle for Connecticut tournament was born.

RecruitTheBronx.com appreciated the chance to get eyes on the young rising Nutmeg State talent.

Every time RTB scouts underclassmen, we remind ourselves that Michael Jordan was cut at the age of 16.  For us, that is short hand for “You tell us who is gonna bust their butt in the practice gym over the next two years, and we will tell you who will play college ball.” That being said, below are some of the guys who caught our eye.

Jahkari Tertulien (2022) 6’3 forward High School: TBD AAU Team: NE Playaz Academy South - a long armed and athletic body, good first step length and speed. Possesses a lot of hard-to-teach assets like body-angle instincts, subtle and effective head fakes, etc.  A good rim defender and has good defensive rotation instincts. As is, he ‘s a high school star on the rise, but if he puts in the hundreds of thousand shooting reps to develop a three ball game, he could take it farther than high school ball.

Damerek Kandic (2021) 6’6 center High School: Hartford Magnet Trinity College HS AAU Team: CT Freedom - “Can’t coach height.” There was not a low post coach in the building who wouldn’t love to be locked in a practice gym with Kandic for a few months. Add the back-to-back tricks of the trade onto this frame and an All Conference player would emerge. He is clearly new to the high level game, but that being said, he effectively used his length to serve and protect on the defensive and rebounding part of the game.

Kevin Lava (2022) 5’10 guard High School: Archbishop Stepinac HS (NY) AAU Team: NE Playaz Academy South - One doesn’t crack the uber-deep CHSAA roster of an Archbishop Stepinac without overachieving. That best describes Lava’s game. He uses toughness and physicality to make good plays. He will have to wait his turn for those Dl bound Stepinac upperclassmen to graduate, but if he invests that time into developing a long range three game, he will be a factor.

Justyn Davis (2022) 6’1 guard High School: Fairfield Warde HS AAU Team: United Youth - In the Basketball Dictionary under the term “positionless basketball” should be a picture of the Davis twins. Either of them can run the point, and/or attack from the wing, and/or lead your team in rebounding and/or defend the opponent’s big man.  Both of these kids have already played a whole lot of basketball in their lives, but they don’t seemed at all bored by it. They run the floor both ways, accelerate into their close-outs and win 50-50 balls.

Ron Riveria (2022) 6’1 guard High School: Holy Cross (CT) AAU Team: CT Dream - A basketball body. Athletic and agile. Quick off of the floor. If he invests a couple hundred hours in his long three point shot ability, the next level will care.

Kevin Bidman (2022) 6’2 guard High School: Danbury HS AAU Team: CT Dream - Has the strong and solid physical look of a next level impact player. A classic case of playing the Big at the high school level, because he is Big at that level.  His ticket to the next level will only get punched in the practice gym, where he needs to build the guard skill game.

Tre Lewis (2020) 6’4 forward High School: Norwalk HS AAU Team: TMT - a nice high-release jumper that he needs to feature more. He is a strong high school forward, possessing length, body control and energy. For him to draw interest at the next level, he needs to display guard skills… Knocking down a bunch of those high-release jumpers would be a good place to start.

Sajan Porter (2022) 5’8 guard High School: King School AAU Team: United Youth - All of us Bleacher Birds hanging around a Sayjan Porter game, need to take a visual snapshot of him now. Look at his dad’s physical length, and then realize Sayjan will not always be the smallest and physically least mature player on the court. He reminds us of a scrawny former Norwalk youth named, Evan Kelley.  A young Kelley, like a young Porter was easy to look past….not so much now, as Kelley is being paid to play the game of basketball.  What Porter has now is the Gym Rat motor, IQ and instincts, length and height will eventually follow.

Aidan Lamonthe (2022) 5’8 guard High School: TBD AAU Team: NE Playaz Academy South - A ball hawk and passing lane pest on defense. Plays with energy and desire. Sees the floor well.  Gets a lot of shots up on quickness and moxy. Will he add the deep three ball to this solid foundation? When he does, many will want him in their starting five.

Edward “EJ” Fasano (2021) 6’4 wing High School: Wilton HS AAU Team: United Youth - “Stop playing zone defense! There’s a Wilton shooter in the house.” He was the best zone-buster in the building today.  Fasano is a classic matchup nightmare.  If you put your big man defender on this 6’4” guy, then those “hand down/mandown” perimeter defensive habits are gonna get lit up.  Or if you switch to your best aggressive close-out guard defender, then he is gonna park himself on the block and play back-to-basket ball.  If over the next two years, this guy drinks a lot of milk shakes and hits the weight room at Wilton High, he will play college ball.

Derric Andrews (2022) 5’9 guard High School: Trinity Catholic AAU Team: Phoenix - solidly built ball handler and has the moxy to weave through the defensive gaps. His set shot is reliable from deep, but he will want to “do the 16 year old Steph Curry thing”...i.e., spend a summer rebuilding that into a next level high release jump shot. At his height, he will also want to add in jump stop-pump-pivot and floater skills.

Zarek Swetye (2021) 5’10 guard High School: Darien HS AAU Team: Phoenix - We are guessing that in some language “Swetye” translates into “Gym Rat”.  This kid plays the game like he loves it.  He is everywhere, doing everything.  Great energy, great desire and a great teammate.  Swetye is relentlessly defending, rebounding, assisting, cleaning up your misses and hustling to get YOU another possession.

Jorge DeJesus (2021) 6’1 forward High School: Bristol Central AAU Team: CT Titans - If there was a football scout in the building, he’d be stalking DeJesus. Part bulldozer, part bull. His games will blow up any tight tourney schedule because he spends so much time at the foul line. He makes those FTs, no doubt the result of getting so many reps there. Rebounds well, creates space for himself in the zone gaps.

Brian Kisken (2021) 6’4 forward High School: Darien HS AAU Team: Phoenix -  DHS coach Charoy Bentley will be working to further this young big into an impact player for his varsity team. Kisken is in only his second season of competitive basketball, but the gene pool height lottery now has him led him to the right sport. If he can learn the low post techniques as well as he can grow his height, he will blossom nicely.