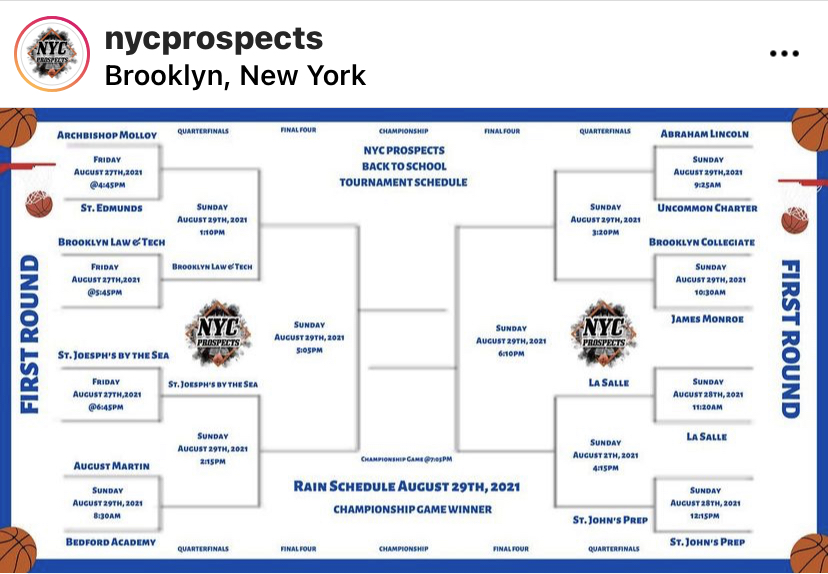 On August 29, RecruitTheBronx.com made it over to Edmunds Playground in Brooklyn to catch five of the games in the final day of the @NYCProspects Back to School Tournament. High School teams from throughout New York City played hard in the outdoor setting. The following showed college prospect potential:

Gregory “Chewy” Ricketts (2023) 5’2 point guard, Brooklyn Law and Tech - If Ricketts was raised in a different zip code, he’d likely be working to land a spot on the USA Olympic gymnastics team. But in Brooklyn, they add basketball skill, savvy and grit to those athletic gifts, and turn him into an incredibly devastating, game-changing player. If you’re a college program that wants to put more fans in the stands, grab this guy. He is a crowd favorite who will fill your gym. The opposing point guard cannot put the ball on the floor, because if he does, his dribble is gonna get “Chewyed up” and turn into two points for Brooklyn Law and Tech. Offensively, he can change direction and advance the ball quicker than the team-defense can stop him. He relentlessly gets into the paint and creates “bunnies” for his teammates. At 5’2, he is not supposed to get to the rim so consistently, but he does. He is so fast up and off the ground, the explosive elevation change is un-guardable. He draws fouls from rim protectors who are 15 or more inches taller than him because they can’t get a clean fix on the explosive change in elevation. He also makes those numerous free throws. Opponent’s cannot afford to let him get a touch in transition, or it’s two more points for Law and Tech.

Siyani Arthur (2024) 5’8 guard, Brooklyn Law and Tech - Arthur is the Baby-Faced Assassin. You’ll be confused by his slight build and ever-smiling face as being some other player’s little brother. Then, Bam! he shreds your defense from every spot on the floor. The Law and Tech squad is ridiculously under-sized, but Arthur’s shot-making and basketball savvy and Rickett’s devastating talents allow them to embarrass more full sized teams. Edmunds Park is the classic inner city graveyard for three point shooters, except for Arthur. It’s tilted end-to-end, it’s tiled left to right, and has the lack of depth perception that outdoor courts have.  Of the five teams that we watched played, no one could hit their 3’s consistently, it was an air-ball fest. Except for Arthur, he was putting up Steph Curry percentages. He was special from deep, but also scored off-the-dribble, with both the jumps shot and the floater. Treat yourself, get to one of this young man’s games before he becomes some college’s steal in three years.

Anthony Graziano (2023) 6’6 forward, St Joseph by the Sea High – There is clearly some high level coaching going on in the St Joseph’s by the Sea feeder system… and Anthony Graziano seems to have absorbed all of it. He is “a clinic” on the details that make a successful player. He makes his stated grad year seem like a typo, in that he plays a grown man’s game. On defense, he is in a stance, with his hands up, and vocal like a QB calling out schemes and adjustments. It’s a rare case to see the biggest body on the court diving onto the (concrete) floor to win the 50-50 balls, Graziano does that too. Physically gifted with height, the speed to be the first one down the court on the break, and he has a large catch radius. He hustles into setting ball screens, leaves a bruise, and then spins into being a big scoring target. Makes the free throws that his agility and craftiness in the paint frequently earn him. He also shows the Kevin Love ability to rebound and then precisely make the long outlet pass to a streaking teammate halfway down the court. He will also lead his college team in rebounding when that day comes.

John Molloy (2022) 6’5 forward, St Joseph by the Sea High – More excellent coach-ability is on display with Molloy. Like Graziano, he maxes out his impact on the game by doing everything as he has properly been taught to do it.  He contributes to winning team defense, with excellent readiness, technique and help rotation instincts. Similar good instincts also put him in the right spot for rebounds. He showed both back-to-the-basket and face-up scoring skills. He and Graziano took turns as the biggest guys on the court outrunning the transition defense. Strong hands helped him both as a receiver and a rebounder. As a potential college forward, he only has D3 size, but he plays with a D1 prospect’s level of execution.

Tafari Jerome (2023) 6’0 guard, Abraham Lincoln High – Jerome has next level bounce and athleticism. He also plays the game with an intensity that will keep college scouts taking notes. He is shifty and strong off-of-the dribble. His ability to elevate makes his mid-range jumper tough to deal with. His 3 point shot shows promise: good form, great legs, and a high release point. With another hundred hours of practice gym reps on it, colleges will be interested. His athleticism and intensity also made him a strong defender. He is quick enough and has enough ups to block shots on driving guards and in help vs low post players. He also has the quick hands, intensity and instincts to be a problem in team defense rotations.

Jonathon Espinal (2023) 6’3 guard, Abraham Lincoln High – Espinal is thickly built and has college guard size. Both his mid-range pull-up and 3 point shot can translate to the next level. He communicates like a team leader and that will help draw notice from scouts.

Elijah Small (2024) 6’7 forward, Archbishop Molloy High – As a rising high school sophomore, Small already shows the physical gifts that will intrigue college scouts. He is long, strong and agile. He is a natural shot blocker and rebounder. He showed the ability to finish with either hand. He was also a willing passer out of the post, using his high sight lines to good advantage. Over the next two years, he needs to invest in learning the techniques of receiving and scoring in the post, and the doors will open for him at the collegiate level.

Aaron Gray (2022) 6’4 small forward La Salle Academy – Gray will be an All State Team performer at the forward position this year for La Salle. The tournament’s glib court announcer, Randy Millard, dubbed Gray “The Baseline Bully”. It was an apt description, Gray was a game-changer in the paint. He plays hard and physical and wants to win. He is a strong rebounder and active rim protector. His hands are vice grips in both pulling down boards and in winning 50-50 scrambles. He is a strong-shouldered athletic player. Offensively, he was a force in attacking from the free throw line in. From a college potential standpoint, he showed guard skill ability when he got the rare chance, which was primarily in pushing the ball in transition. Ie., if he can find practice gym time to build a three point shot and complimentary perimeter attack skills, he’d have a shot at being a “position-less” asset at the next level.