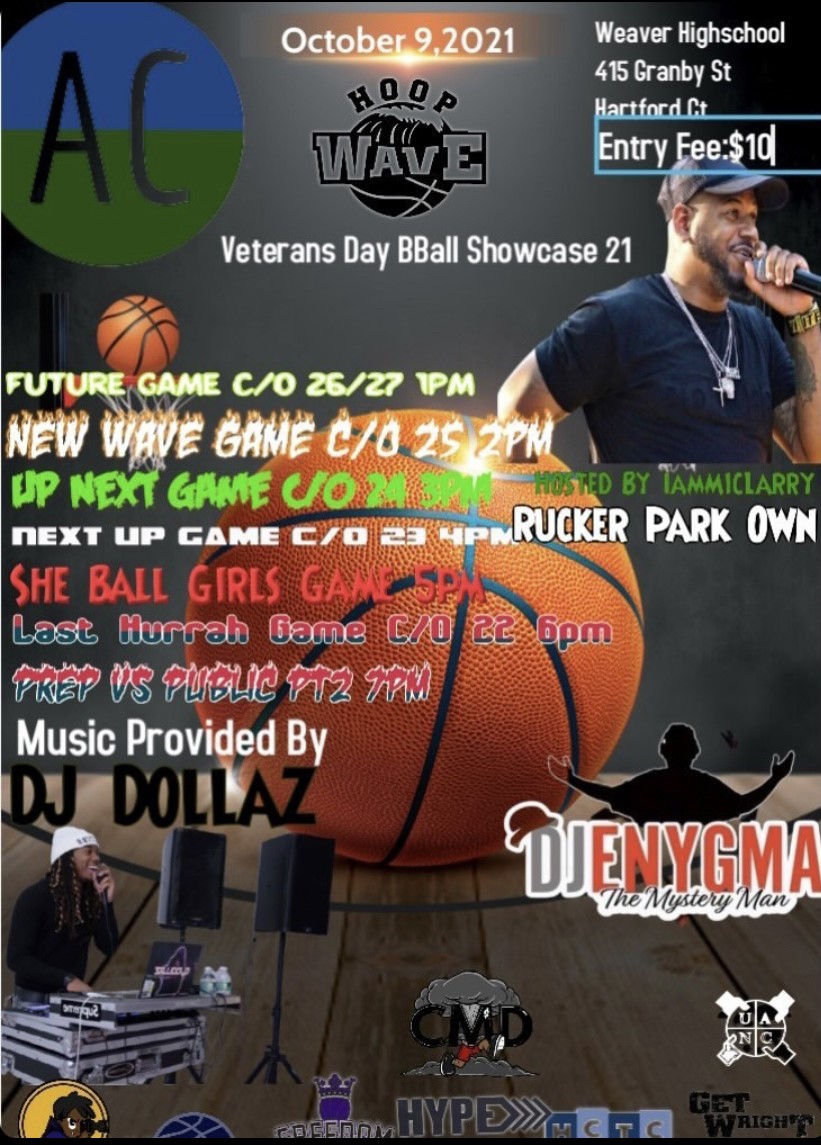 HoopWave Directors Dean Jones and Jamaal “Coach Shaq” Folston are in their fifth year of hosting their great day of basketball celebration that is known as the Veterans Day Basketball Showcase. This year it is being held at Weaver High School in Hartford, CT. A high point of the event is the Prep vs. Public high school boys game. They match up some of the region’s biggest standouts. This year the rosters include the following:

Gavin Griffiths (2023) 6’7, Kingswood-Oxford School (CT) - Holds offers from numerous D1 schools, and is ranked nationally at #75 by ESPN and #35 by Rivals.net. He is a top player in his class for New England. This long and athletic kid can score from inside and outside with a vary of moves.

Justin Menard (2024) 6’2, Loomis Chaffee School (CT) - This sophomore already holds an offer from NJIT. Crafty guard who can control the game with his high IQ and looks to be a major asset in school this year. He will be on full display at the HoopWave showcase. CIAC All State Player last year for Xavier High.

Tayeshawn Pemberton (2022) 6’2, St Andrews School (RI) - Pemberton has been on a tear lately as he has transformed his body into a legit D1 guard prospect. He runs with Expressions EYBL Select team in the summer, and in the D1 training ground that is NEPSAC AA in the winter. Be on the lookout for a super year from him, he will be bringing showtime to the Hoopwave Showcase.

Dashon Gittens 6’3, Putnam Science (CT) - Mr Gittens will be on full display in the Prep Vs Public game as he brings an array of skills with him. He holds numerous of offers from D1 programs and will be committing in days to come. For now, catch him at the Hoopwave Showcase before he is gone.

Jack Nieradko 6’9, Kingswood Oxford (CT) - This big sturdy mountain will be a major piece in K-O’s run to a chip as he teams up with Gavin Griffith to form a major 1-2 Punch. He is trending toward a Mid-Major/High Major college career.

Tre Duncan 6’2,  Notre Dame-West Haven (CT) - This silky smooth sharp shooter can fill it up with the best of them and will be on call to fill it up at The HoopWave showcase. Grab your popcorn you don’t wanna miss the show.

Alex Barber (2024) 6’6, Paulo Freire School (RI) This long athletic swing man is reminiscent of Tayshaun Prince. He can fill it up with the best of them. He has been doing his thing on the grassroots circuit with BABC EYBL team.

Craig Wilson Jr (2022) 6’0, Woodstock Academy (CT) - This sturdy point guard can run a team and has an aggressive defensive side. He has a high motor and IQ. He would be a great asset to a high level D2 program right now. Possibly a year at Woodstock will push him into the D1 ranks.

Lukas Gudavicius (2022) 6’9, Avon Old Farms School (CT) - This international superstar has been turning heads and piling up D1 offers since arriving in the States this past spring. He can shoot, dribble, and put it on your head if he catches you sleeping.

Elijah Wilborn (2022) 6’7, Middletown High -This manchild is ready to tear up the CCC and the CIAC.  He has grown into his body and now his game is taking shape.  He is a mixture of Andre Drummond’s strength and rebounding mixed with a little of Vin Baker’s scoring skillset. No one can match his toughness when he sets his mind to it. Offers will be coming at a rapid pace with new Middletown head coach Eric Holley at the helm.

Tyrone Cummings 6’2, Norwich Free Academy - This kid has uncanny athleticism, built like a running back and has nearly a 40 inch vertical. He also has one of the toughest midrange pull-ups we’ve seen in a while. He still needs more polish on defensive side but has Lebron-like chase-down defense abilities. Played his AAU ball with NE6/HoopWave Select Team.

Keyshawn Mitchell (2022) 6’9, Capital Prep High - This stud has numerous offers right now in his waistband. He has stayed loyal to Coach Gillespie despite offers from other schools to transfer.  He wants to go out with squad he started with and bring a chip to Capital Prep. He has the tools to do it, he can shoot, handle and drive with the best of them. He will be looking to win MVP once again in the HoopWave Showcase and have his name mentioned with other great players who have won multiple HoopWave MVPS.

Jevan Foster (2022) 6’6, Norwich Free Academy - You have to see this Lebron James mold player. He is still raw, but when he walks into a gym, your head will spin. His freakish strength and athleticism will have schools scrambling to gain his services at the next level.

James Jones (2023) 6’5, East Catholic High - This young stallion will be set to make his mark as one of the leaders for a young East Catholic team. ECHS has its sights set on keeping their winning ways. Jones will show the skillset that has been handed down to him thru his Jones’ bloodlines and will show his worth at the Showcase.

Avery Hinnant (2022) 6’6, Naugatuck High - This forward has a low post game that reminds you of a young Shaq.  His raw power is unmatched and will look to lead Naugatuck to a conference and hopefully state championship.

London Jemison (2024) 6’6, Northwest Catholic High - This young baller has emerged over the spring and summer while playing with Expressions Elite on EYBL Circuit and likely will be emerging as an All Stater this upcoming season.

Tyler Betsey (2024) 6’9, Windsor High - Coach Ken Smith seems to reload every year, and this year he has a group of young pups ready to let loose. The one with the biggest bite is his 6’9 phenom with a Tracy McGrady like game. Watch him work and do his thing at the Showcase and then lead Windsor high back to prominence.

Quentin Duncan (2024) 6’4, Notre Dame-West Haven PG - This stud will be facing his big brother Tre in this game and looks to set himself apart. He is a 6’4 combo guard with an array of skills. He is also playing for the post grad squad at Notre Dame, but will rep the public squad and show why is amongst the state’s elite in the Showcase.

Austin Cannon Jr (2022) 5’10 Norwich Free Academy - Cannon is the small guy of the bunch, but packs the biggest heart. He is a transfer from St Thomas Moore’s prep program. This senior will look to bring his deadly sharp shooting touch to the HoopWave Showcase and let the world know he is set for the prime time stage. This winter he will look to lead a stacked NFA squad to a State Title under new head Coach Dave Cornish.