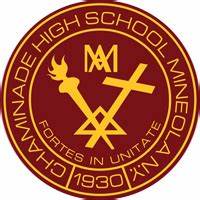 Feeney has spent the past 13 years coaching at Chaminade, eight as the freshman coach, and the last 10 as the varsity assistant. Some of the key players that he will be relying on for his varsity head coaching debut are:

Greg Cantwell (2022) 6’2 Guard - Cantwell has an ability to do a little bit of everything in the backcourt.  He is a high IQ player with a lethal pull-up but can also consistently knock down the 3. His work ethic is unmatched and he is expected to do everything for the Flyers this season. 3.5 gpa

Mac Kelly (2023) 6’0 Guard) - Mac has developed into a true floor general.  He will be asked to handle much of the PG responsibilities while still maintaining his ability to score.  Mac has a much improved 3 point shot.  He is often asked to guard the other teams best player as well.  One of the tougher kids in the program.

Dave DeBusschere (2023) 5’10 Guard) - Dave is the grandson of the former Knick’s great and is an outstanding perimeter shooter, one of the best shooters in the area.  He returns for his second year in the starting lineup with a target on his back.  He has expanded his game and look for him to have another big year for the Flyers. 4.0 gpa

Bradley Wyckoff (2023) 6’4 Forward - Bradley is the ultimate glue guy. A two-sport athlete as a standout in lacrosse will play a major role in the paint for the flyers.  He is able to handle the ball as well which gives us many options on how to use him. 3.7 gpa

Deepuk Edmonds (2022) 6’7 Forward - Deepuk is a very skilled versatile big that score both in the pain and all the way out to 3.  He provides the Flyers with tons of impact in the front court. 3.9 gpa

Antoni Vlogianitis (2023) 6’2 Guard - Antoni is another OUTSTANDING shooter for the flyers. He provides great depth in the backcourt and look for him to have to big games this year. Another Flyer with an outstanding work ethic.  Has improved as much as anyone in the program over the last two years due to his work. 3.2 gpa

Joe Knaus (2024) 6’4 Forward - Joe is the only sophomore on the roster, and he has the ability to shoot it at a very high level. Other parts of his game are still developing, but he has a very bright future.  Look for him to increase his effectiveness as the season moves forward. 3.7 gpa

Albert Knaus (2023) 6’5 Forward - Albert is the heart and soul of the Flyers.  He is a very versatile and physical forward that backs down from on one. The ultimate teammate.  He can shoot the 3 and also finish at the rim. 3.3 gpa