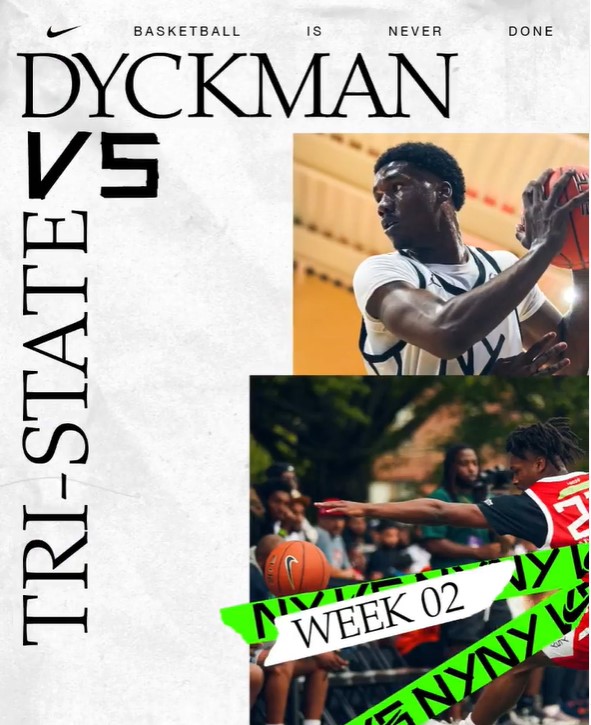 On June 28, RecruitTheBronx.com followed Nike’s NY vs. NY tournament to the Monsignor Kett Playground in the Inwood section of Manhattan for its second week of action this summer. Two games were played, with the first being between Lincoln Park and West 4th Street and the main event being between the host and defending champions, Dyckman and Tri-State. At the end of the night, both Lincoln Park and Dyckman emerged victorious and undefeated at 2-0, while Tri-State fell to 1-1 and West 4th to 0-2 in league play.

Here are some of the standouts in Week 2 action:

Phil Grant, Jr. 6-5, Shooting Guard, Tennessee Prep Academy (TN), West 4th Street, Class of 2023 - A guard that likes to play an uptempo game, where he he is able to get down court with ease and flash to the basket. Has the ability to crash the boards and obtain rebounds in the post. Is very fearless when going to the basket to score and is very successful at finishing.

Elijah Bailey 5-10, Point Guard, Tennessee Prep Academy (TN), West 4th Street, Class of 2023 - A guard that is smart with the ball and has the ability to control the game and handle his team. Has the ability to drive to the basket and has plenty of fearlessness in his game. Is good at dishing the ball to his teammates and putting them in position to score. Has a penchant for staying with his man and pickpocketing the opposition for a steal, which then leads to scoring at the other end.

Treyshawn Sheppard 6-6, Forward, Eagle Academy II, West 4th Street, Class of 2023 - A forward that can be a huge asset to his team every time he is on the court. Is able to hold his own in the post area, whether he is going up to score or going up for a rebound. Is also a good passer, which aids in his teammates getting the ball.

Qinfang Pang 6-9, Forward, Christ the King High School, Lincoln Park, Class of 2024 - A forward with a long wingspan and plenty of size that has the ability to be versatile. Is able to alter or block shots in the paint, due to his long arm reach, which may intimidate people from scoring. Has the ability to shoot from long range and can make plenty of layups when muscling his way into the post.

Benjamin Lyttle 6-5, Forward, Archbishop Stepinac High School, Lincoln Park, Class of 2023 - A forward that gives plenty of energy when in the paint and is a solid player for his squad. When he is not scoring, he is able to do other things on the court, as he is able to obtain rebounds in the paint. Always finds a way to make an impact on the game.

Chike Ndefo 6-6, Forward, Vermont Academy (VT), Lincoln Park, Class of 2024 - A forward that is great at providing plenty of energy in the post. Has a long wingspan and uses his strength to draw fouls and muscle his way to the post. Has the ability to shoot from long range and can also block shots and grab rebounds in the low post. Has good eyes on the defensive end, as he is also alert when it comes to getting steals.

Brandon Williams 6-7, Forward, Christ the King High School, Dyckman, Class of 2023 - A forward that is very skilled and will make an impact every time he is in the game. Has a good three-point shot and a nice form whenever he goes up to shoot. Is able to put the ball on the floor and drive to the hole. Finds ways to get his teammates involved when he’s on the perimeter and makes sure that they have opportunities to score.

Tai Turnage 5-10, Point Guard, St. Raymond High School, Dyckman, Class of 2025 - A guard that has plenty of poise when on the court. Is never rattled and does not back down to any challenge every time he is on the court. When going to the basket, he goes up strong and is prone to getting to the free-throw line.

Diovion Middleton 6-5, Shooting Guard, Woodstock Academy (CT), Dyckman, Class of 2023 - A guard that has a penchant for scoring at all times, as he will drive to the basket or step out and shoot. Will get to the boards and rebound efficiently. Has great court awareness when handling the ball on the perimeter and makes it his mission to get his teammates the ball.

Christian Jeffrey 6-2, Shooting Guard, Bishop Loughlin High School, Dyckman, Class of 2024 - A guard that is prone to giving plenty of effort on the floor when he is inserted in the game. Can get quick baskets by driving into the lane and finishing at the basket. Can hold his own around the boards, as he is able to rebound and then run on the fast break.

Clinton Efinda 6-7, Forward, Combine Academy (Global) (NC), Tri-State, Class of 2023 - A forward that makes his presence felt in the paint area, as he gives his team plenty of minutes and plenty of effort. Is very explosive, as he finds ways to get to the basket and play above the rim. Is able to see the court and dish a pass to his teammates, so that he can score.