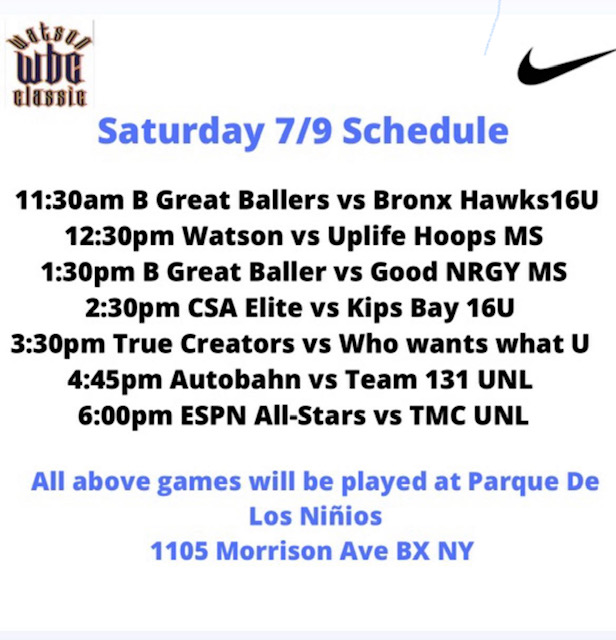 Bryce Hamilton, 5-9, Shooting Guard, Teaneck High School (NJ), Be Great Baller’s, Class of 2026 - A guard that has plenty of strength and isn’t afraid to absorb contact when going to the basket. Is a player that can create off the dribble and loves to drive to the basket. Has a penchant for shooting from deep.

Johanter Cruz 5-6, Point Guard, Monsignor Scanlan High School, Be Great Baller’s, Class of 2026 - A guard that has the ability to be a playmaker. Despite his small frame, he has plenty of fearlessness in his game. He is able to get his shot off efficiently and loves to drive to the basket. Has a penchant for finishing at the basket in transition.

Brandon Torres 6-2, Forward, Middletown High School (CT), Be Great Baller’s, Class of 2024 - A forward with a long wingspan and the ability to hold his own in the post area. Has the ability to use his strength and physicality that helps him finish when going on the offensive end. Is able to get putbacks when going to the rim.

EJ Quianes 5-10, Cardinal Spellman High School, Bronx Hawks, 2024 - A guard that likes to run on the fast break and has the ability to make plays in transition. Is a good finisher at the basket and is very fearless when driving to the hole. Has excellent court vision, as he is able to dish out passes to his teammates and put them in position to score.

Chris Diaz 6-0, Shooting Guard, Monsignor Scanlan High School, CSA Elite, Class of 2024 - A guard that is able to take over a game when he has the ball in his hands. Is a guard that likes to drive to the basket and is a solid finisher when going to the hole. Has a nice jumper, which he hits when on the perimeter.

Jaron Broomfield 6-3, Shooting Guard. St. Raymond High School, Kips Bay, Class of 2024 - A guard that has the ability to make his presence felt with his creativity on the court. Is a solid defender when he’s on the court as he aids his team with steals and is great at sticking with the opposition. Has the ability to get past his defender on the offensive end to score.

Abel Samboy 5-5, Point Guard, St. Raymond High School, Kips Bay, Class of 2025 - A guard with plenty of quickness that likes to run in transition. Is able to make sure his teammates have the ball and are in position to score when the opportunity presents itself. Has the ability to get his shot off efficiently.

Jasiah Jervis 6-2, Shooting Guard, Archbishop Stepinac High School, Kips Bay, Class of 2026 - A guard that can take over a game when he is in control of the ball. Has a nice shooting touch and can destroy a team from three-point range when he is not guarded heavily from that area. Is a guard that can drive to the basket and finish with ease. Is never afraid to take a good shot when the opportunity presents itself.