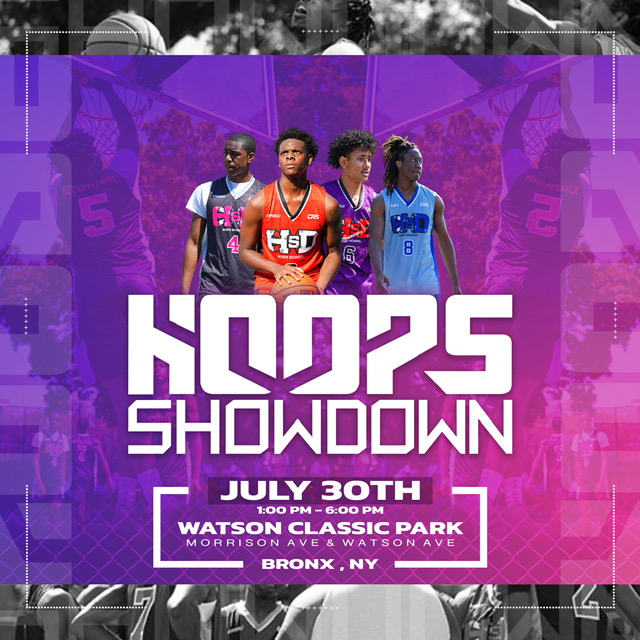 On Saturday, July 30, RecruitTheBronx.com made a visit to Parque de Los Niños Playground in the Soundview section of The Bronx for the Hoops Showdown, an event in which four teams from the tri-state compete against each other through three games. Here are the standouts from the games:

Brandon Williams 6-8, Forward, Christ the King High School, OTN, Class of 2023 - A forward with a solid build that likes to run the floor in transition. Is very active when on many ends of the court and shows plenty of athleticism when playing above the rim. Is able to absorb plenty of contact when playing on the low post when going up for rebounds or going to the basket.

Tai Turnage 5-10, Point Guard, St. Raymond High School, OTN, Class of 2025 - A guard that has the ability to make an impact when on the court with his teammates. Is fearless when driving to the basket and can find ways to score. Will take jumpers whenever he has an opportunity & looks to also facilitate by putting his teammates in the right positions to score.

Diovion Middleton 6-3, Shooting Guard, Woodstock Academy, OTN, Class of 2023 - A guard with the ability to use his strong build on the boards and also is able to absorb physical contact when going up for two. Is able to put the ball on the floor and can attack in transition. Has the ability to take over a game when he has the ball on his hands.

D’Andre Gibbs 6-1, Shooting Guard, Monsignor Scanlan High School, OTN, Class of 2024 - A guard that is very shifty and can do many things with the ball at his position. Has plenty of athleticism, as he is known to play above the rim. Is able to get past his opponent with his dribble and goes to the basket with plenty of strength. Is a solid playmaker when he has the ball in his hands.

Darryl Wright, 5-7, Point Guard, Holy Redeemer High School (PA), The Nation, Class of 2023 - A guard that has the ability to control the team on the court and gets his teammates good opportunities to score with his passing. Knows when to drive to the basket & is a great defender, as he is good getting steals on the court. Is fearless when it comes to absorbing contact and will find a way to get to the free throw line.

Jonathan Lamothe, 6-4, Shooting Guard, St. Frances Academy (MD), The Nation, Class of 2023 - A forward with plenty of size and the ability to be very versatile on the floor. Is able to bring the ball up and make his move on the perimeter and can see the court. Is able to step out and shoot from long range. Is able to slice and dice his way to the rim and can absorb physical contact on the way to the rim.

Quincey Platt 6-8, Forward, Stevenson High School, The Nation, Class of 2023 - A forward that is able to make a big impact whenever he steps on the floor. Despite his large frame, he is able to put the ball on the floor and get down court with ease. Is able to control the paint area on the defensive end as well, as he has the ability to block shots and obtain rebounds with ease.

Yossouf Singare 7-0, Forward, Our Saviour Lutheran High School, Road To Riches, Class of 2023 - A forward that is able to make strong drives to the basket at all times on the court and is a good finisher at the rim. Knows when to time when the opposition is going up for the basket, so that he can swat their shot with authority. Has a nice shooting touch whenever he is able to shoot.

Jahmere Tripp 6-5, Forward, Our Saviour Lutheran High School, Road To Riches, Class of 2023 - A forward that uses his strength to make his presence felt on the floor. Uses his physicality to rebound and is a force in the low post for his team. Is able to put the ball on the floor like a guard and can drive to the basket. Is also able to shoot from the perimeter and is always ready to take on a challenge.

Seydou Traore 6-5, Forward, Our Saviour Lutheran High School, Road To Riches, Class of 2023 - A forward that is able to hold his own when he is on the court. Is a solid rebounder and is a huge asset to his team when on the court. Is fearless when attempting to score and finishes with strength. Is able to block shots when on the defensive end.

Taj Bryant 6-2, Point Guard, Eagle Academy II, 2G’z, Class of 2024 - A guard that is a solid playmaker whenever he hits the court. Is able to get past his defender with no problem and has a nice handle. Is a great facilitator to his teammates and can help get them the ball during crucial moments on the floor.

Myles Mucius 6-6, Forward, MacDuffie School (MA), 2G’z, Class of 2024 - A forward that is very skilled on the floor and will make his presence felt in multiple ways. Is able to create for himself off the dribble and can shoot from anywhere on the perimeter. Is able to drive to the basket and is a great finisher. Has great passing instincts when he’s on the court.