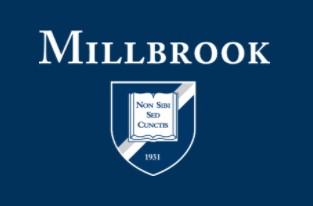 The Millbrook School is a coeducational, college preparatory boarding school for students in grades 9-12. It’s 800-acre campus is located in Millbrook, NY. It’s varsity basketball program has been on a steady rise over the past nine seasons as a NEPSAC program since coach Billy Thom took the helm. This upcoming season will feature Thom’s deepest pool of college prospect talent yet. Several college colleges will be making the trek to Millbrook during their Open Gym schedule this Fall.

Liam Kennelly (2023) 5’11” 170 lbs, Point Guard - Tough, quick, and intelligent point guard.  Rated a D1 radar prospect by 247 Sports Director of Scouting Adam Finklestein. Myriad of interest from NESCAC, UAA, Landmark, Liberty League. High basketball IQ, actively looks to get other guys involved, and is a leader on both ends of the court.  Strong finisher with either hand and has the ability to create his own shot from mid-range to beyond the three-point line. Has developed a floater out to 12 feet. Excellent communicator who has some “stuff” to his game. Will pick up the ball full court and does a fantastic job switching in the halfcourt. A winner, bar none.  3.9 GPA.

Lucius Gibson-Savadel (2023) 6’10” 245 lbs, Center -Mid-major to low-major prospect. Adam Finklestein rates him as a HM radar. Current MAC, MAAC, Ivy, SoCon, CUSA interest.  All-NEPSAC Honorable Mention this past year. Needs to continue to develop an aggressive edge to go with his still growing 17-year-old frame.  Plays with PSA on the EYBL circuit. Has soft hands and soft touch around the basket.  Has developed an ability to finish with either hand, though more of a left shoulder finisher out of the post currently. Still developing as a rim runner due to tree trunk legs and huge feet. Can switch onto smaller guards on the perimeter and keep the ball in front of him. Averaged 12.4 points per game and 9.4 rebounds per game in 2021-22 season. 3.3 GPA.

Ethan Madeiros (2023) 6’4” 205 lbs, Forward -Has only been playing organized basketball for a few years. Ton of upside physically as a long and athletic forward. Can make jump shots consistently out to the three point line. Can guard 1-5 at the NEPSAC level. Aggressive rebounder who finds his way to loose balls often.  Still learning how to play within a system, though has developed IQ and vision each year.  Needs to continually play over the next calendar year to develop his feel to match his physical skills, though has made large strides as far as how to fit into a team game/concept.  3.4 GPA

Alex Neuman (2023) 6’1” 170 lbs, Guard -Spark plug of a player off the bench for Millbrook last year. Knows his role and how to have a consistent approach to practice and competitions. Uses his IQ to make up for lack of lateral foot-speed. Played key minutes for Millbrook down the playoff stretch in the 2021-22 season. Shoots the ball well from 3, despite mechanics looking funky. Can put the ball on the deck and get into the lane for pull-up jumpers and floaters, as well. 3.3 GPA.

Yechiel Stewart (2023) 6’2” 190 lbs, Guard - An incredibly intriguing prospect for academic DIII schools and scholarship level schools, alike. Bouncy athlete who plays above the rim and can also shoot the ball consistently from deep range. Will cause havoc on the defensive side of the ball in Millbrook’s scheme this coming season. Unselfish - was a point guard earlier in his basketball career and has the skills that match that trajectory. Very intrigued to see what colleges think of Yechiel over the June schedule.  3.5 GPA.

Kyle Marshall (2023) 6’5” 190 lbs, Guard - Post-grad joining Millbrook from St. Dominic’s (LI). Playing with NY Heat Lightning on the AAU circuit this spring/summer. A Patriot/Ivy level talent at scoring the ball. Working on developing more defensive consistency and ball control. Facilitates for others and can fill up the stat sheet on multiple levels. Already is garnering various interest from UAA, NESCAC, Liberty, and Landmark. Some MAAC interest, as well. 3.9 GPA.

Mark Ostad (2024) 6’2” 185 lbs, Guard - Creative, explosive, and looking to make others better in transition. Not just a straight line slasher at his age. Creative finisher with either hand who will improve in this area as he continues to physically mature. Catch-shoot shot maker on the perimeter who has further developed his range in the last year.  Will be expected to improve his understanding of team goals and style of play in his second year in the NEPSAC. 3.7 GPA

Matthew Belsky (2024) 6’2” 185 lbs, Guard -Joining Millbrook as a reclass junior from Browning School. Good sized guard who can truly fill it up from the 3-point line. Will be challenged to develop more consistency in his ball control and defensive approach as he makes the jump to the NEPSAC. An extremely hard worker who has continually improved over his middle school and early high school career. Plays with ABC Rubin on the AAU circuit.  3.8 GPA.

Nico Jorba (2024) 6’6”, 195 lbs. Wing, Millbrook School (NY) - Another extremely intriguing prospect. Long, active, and with a tremendous nose for the ball, Jorba is a coach’s dream. Learning how to score more consistently, Jorba will be expected to guard multiple positions for Millbrook next year, as well as be an offensive practice on multiple levels. Is able to shoot the ball out to the 3 point line; however, will need to develop consistency in that aspect of his game. The best is yet to come for this young man. 3.8 GPA.

Zoumana Traore (2025) 6’5” 190 lbs, Forward - Older brother playing at DI St. John’s.  Plays for the PSA Cardinals AAU program.  Tremendous upside as a scholarship basketball player. Potential future professional. Humble and hard-working.  Athlete who creates opportunities for scores and stops because of his activity, motor, and length. Grew physically and skill-wise in his freshman campaign before a knee injury. Much growth still to come for this young man.  3.5 GPA

Andre Widmer (2025) 5’10” 150 lbs, Guard - Will be expected to play a back-up guard role as a sophomore for Millbrook. Quick with his hands and feet, a naturally gifted soccer player, as well. Is building consistency in perimeter jump-shooting. Best question-asker in practice on Millbrook’s roster. A sponge for learning and will continue to improve.  3.6 GPA