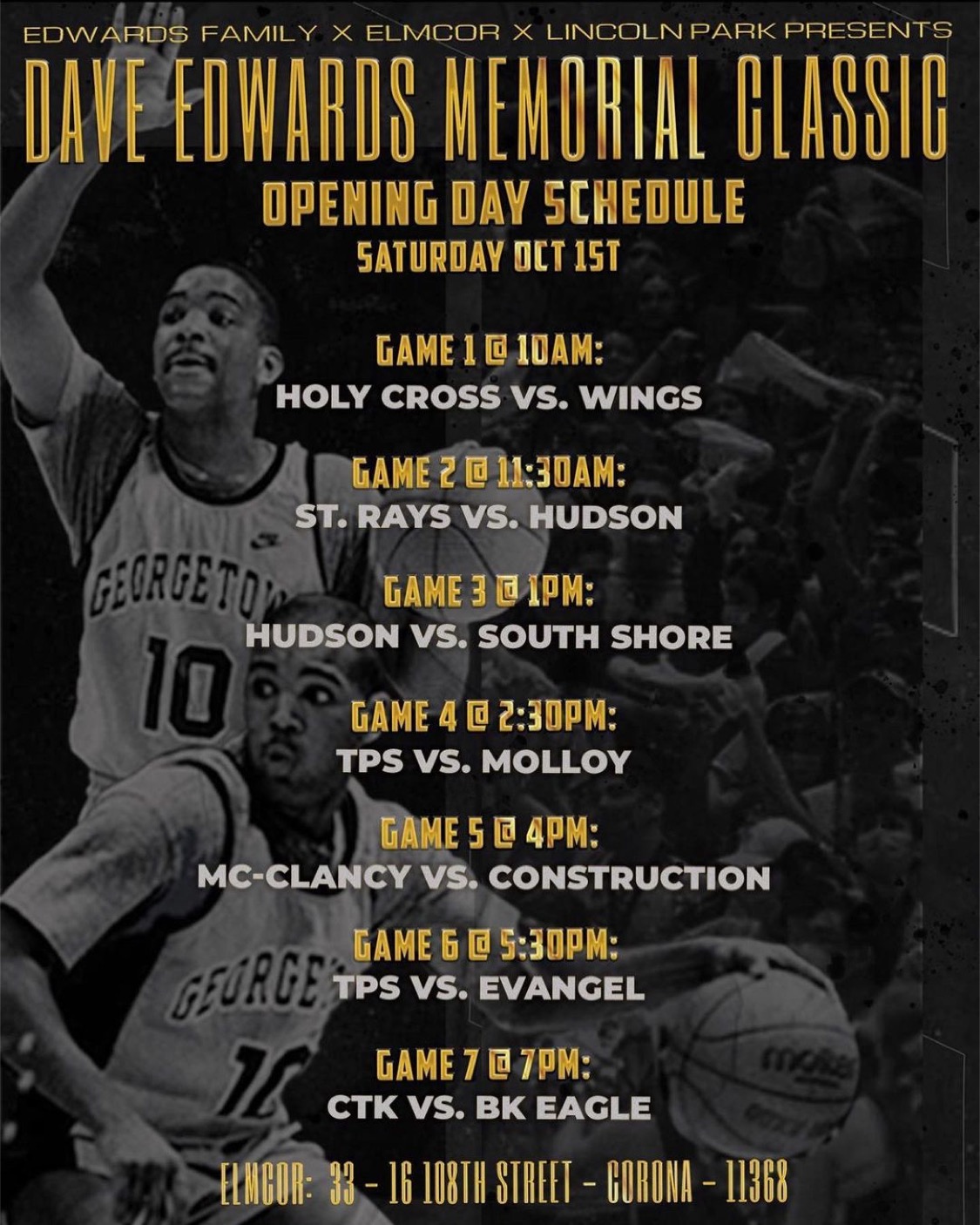 On Saturday, October 1, RecruitTheBronx.com paid a visit to the Elmcor Youth & Adult Activities Center in Corona, Queens for the 2nd annual Dave Edwards Memorial Fall Classic. The event is held in memory of the late Dave Edwards, a former All-City guard and a 1989 graduate of the now-defunct Andrew Jackson High School in Queens. Edwards went on to play collegiate basketball on the Division I level at Georgetown University and Texas A&M University, where he graduated in 1994.

This event had some of the premier high school teams in the tri-state area playing against each other and there were some intense games on display. Here are the standouts from the day’s action:

Elijah Gertrude 6-4, Shooting Guard, Hudson Catholic High School (NJ), Class of 2023 - A guard that has the ability to make an impact on the court and has plenty of energy. Is able to drive to the basket at will and is great at playing above the rim by throwing down powerful dunks. Has a penchant for absorbing contact as a way to draw fouls to get to the free-throw line. Also has a penchant for pulling up with a jumper that has a nice, fluid motion.

Omari Moore 6-3, Shooting Guard, Hudson Catholic High School, Class of 2025 - A guard that has a penchant for making an impact every time he’s on the floor. Has a quick first step and can attack the basket. Has a nice jump shot with a quick release from the top of the key or from three-point range.

Tahaad Pettiford  6-1, Point Guard, Hudson Catholic High School, Class of 2024 - A guard that has a penchant for being the lead guard and controlling the offense. Has excellent court vision and is able to make sure that his teammates get the ball in the right spots. Has the ability to create for himself on the offensive end. Has a nice pull up jumper that he attempts from the top of the key & is a very athletic player when he is driving.

Jarrett Dingle 6-2, Point Guard, South Shore High School, Class of 2023 - A guard that has the ability to be a leader for his team as he is a great distributor to his teammates when it comes time passing the ball. Has a penchant for driving to the basket and being a strong finisher at the basket. Will shoot jumpers from the perimeter.

Jalen Obrian 6-6, Forward, South Shore High School, Class of 2023 - A forward with plenty of strength and a player that will run the floor and give maximum effort every time he gets on the floor. Is physically imposing every time he’s on the floor, as he is an asset to his teammates at all times with his strong play in the post. Can be counted on for rebounds and blocked shots.

Jago Robinson 6-2, Shooting Guard, South Shore High School, Class of 2024 - A guard that possesses plenty of scoring for his team and plenty of energy. When driving to the basket, he is able to make plays and is a good finisher. Has the ability to play above the rim and is good at decision-making when on the offensive end.

Seck Zongo 6-6, Forward, The Patrick School (NJ), Class of 2023 - A forward that likes to run on the floor on a fast break and is active on both ends of the floor. Is able to put the ball on the floor and create for himself. Is a very athletic player and will get to the rim with ease.

Daye Kaba 6-5, Shooting Guard, The Patrick School (NJ), 2024 - A guard that has a very smooth game and is very crafty. Is able to make very smooth drives to the basket and can attack the lane with his dribble. Has a nice smooth jumper with a nice follow through on his jumpshot. Is very fearless when it comes to driving to the basket.

William Patterson 7-0, Center The Patrick School (NJ), Class of 2023 - A center that is able to dominate around the basket on both ends of the court. Has a penchant to alter his opponent’s shot or to block it. Is able to maintain a physical presence around the basket, as he is always alert for an incoming rebound or the opportunity to throw down a powerful dunk.

Josh Powell 6-2, Shooting Guard, Archbishop Molloy High School, Class of 2026 - A guard that has the ability to use his strength as an edge when on the court. Is fearless and can absorb physical contact when going to the basket. Has a penchant for hitting jumpers from the top of the key and brings poise and maturity that is wise beyond his years.

Jayden James, 6-3, Shooting Guard, Archbishop Molloy High School, Class of 2023 - A guard that has the ability to do plenty of things when on the floor. Has the opportunity to make great plays on the court, as he is active on the defensive end and can be a key presence on the offensive end. Knows when to drive or pass when he has the ball on his hands. Is a great finisher when going to the basket.

Emil Hernandez 6-5, Forward, Evangel Christian School, Class of 2023 - A foreword that is strong and a player that has good footwork. Is able to establish position in the post and is able to corral rebounds on both ends of the court. Is able to go to the basket and can finish with strength.