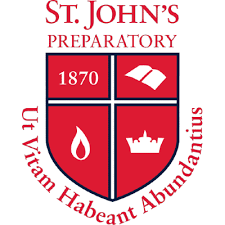 St. John’s Preparatory School, a college preparatory co-educational Catholic high school located in Astoria, Queens. Their boys varsity basketball team competes in the CHSAA B Division and is headcCoached by their Dean of Students John Kiggins and assistant coached by Brian King.

Below are the profiles of the players on their 2022-23 roster:

Marcos Otero (2023) 5’9 Guard - A lightning quick and crafty guard who can breakdown defenders and score in the paint as well as having great vision to make the extra pass. An elite scorer as well from the outside, he will be the one to make the offense go.

Timothy Rosario-Richarson (2024) 6’2 Wing - A tremendous wing player who can knock it down from all areas around the arc. A quick first step as well getting into the paint and a great build allows for him to finish in traffic at the rim. A tremendous on ball defender as well, he will match up with the other teams best player.

Victor Otero 6’3 Point Forward - A tremendous body build and super athletic and quick, will create major matchup problems for opposing teams. He is able to score all throughout the paint as well as bring his game beyond the three point line and bringing the ball up will be a major factor this year.

Jayden Lynch-Frazier (2023) 6’0 Wing - One of the few returning players from last years championship appearance team will have a major role in leading the team back to the final game again this year. A scorer from beyond the three point line as well as around the arc will be a major factor in this years team success.

Jacob Gomez (2025) 5’8 Point Guard - Will be making the jump from JV to Varsity and have a major role as a sophomore. The crafty PG who is super quick and has incredible vision will have major duties bringing up the ball this year and making the offense go.

Patrick Rouse (2025) 6’5 Wing - Another player making the jump from JV to Varsity, Patrick will be an explosive wing player this year for the Red Storm. With the ability to finish at the rim with his athleticism as well as being an elite rim protector, Patrick will log major minutes for this team.

Khalil Sutton (2023) 5’9 Guard - Another returning piece from last years team will be Senior Khalil Sutton. Khalil who is a defensive pest will be responsible for creating havoc getting in passing lanes and then leading the charge in transition. He will be a major piece for this team if it is to be successful.