2022 Ballin' in the Bronx Top Performers 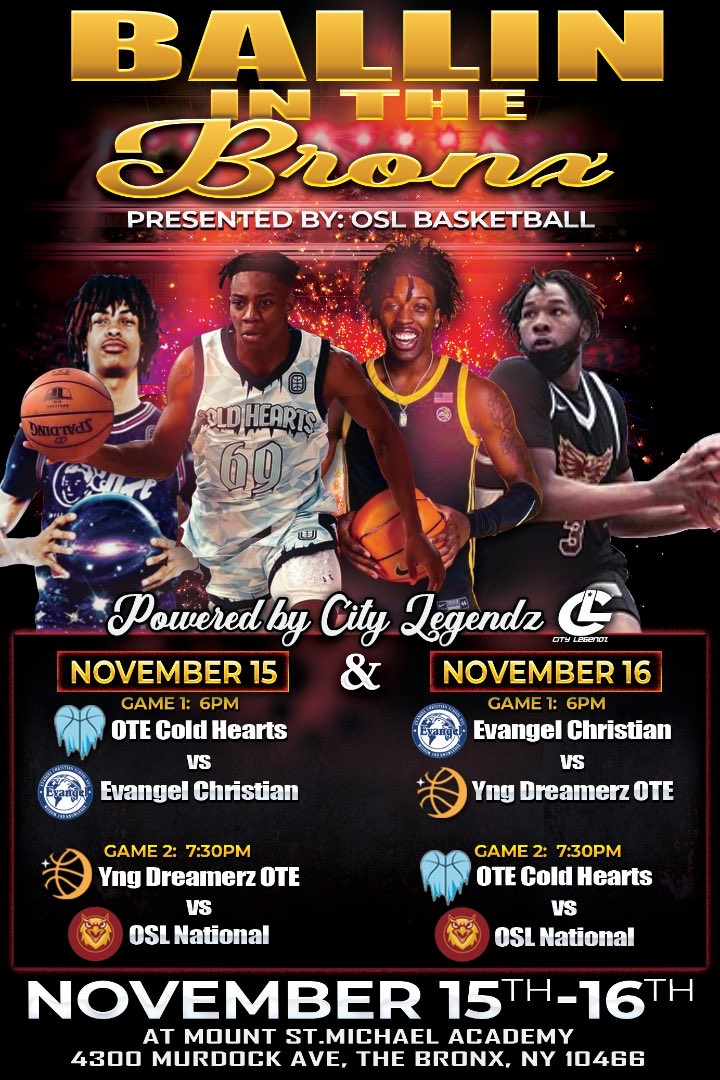 On Tuesday night, November 15, RecruitTheBronx.com made a visit to Mount St. Michael Academy in The Bronx for the Ballin’ in The Bronx Showcase, which was put together by City Legendz. It was an event to showcase both of Overtime Elite’s teams in YNG Dreamerz and Cold Hearts. Two of New York City’s own teams in Evangel Christian Sports Academy and Our Saviour Lutheran High School came out to compete against both squads on this night. Here are the standouts from both games:

Steven Ceballos 6-4, Shooting Guard, Evangel Christian Sports Academy, Class of 2026 - A guard that has the ability to showcase plenty of hustle on the court and is able to make an impact for his team every time on the court. When the ball is in his hands, he is able to make good decisions as far as scoring or distributing the ball to his teammates. When scoring, he is able to slice and dice past his teammates and can get to the basket with ease.

Esnadyel De Leon 5-10, Point Guard, Evangel Christian Sports Academy, Class of 2025 - A guard that has great leadership skills on the court. Is able to see where his teammates are moving at all areas of the court so that he can put them in position to score. Is always alert on defense and can swipe the ball easily & get to the other end of the court in quick fashion.

Josniel Jimenez 6-6, Forward, Evangel Christian Sports Academy, Class of 2026 - A forward that has the ability to play at both the three & four position when on the floor. Is able to put the ball on the floor and get past the opposition with ease. Is able to step out and hit a shot from three-point range & can find a way to get open to hit some hit jumpers or to drive the basket.

Gabrile Cambris 6-0, Point Guard, Evangel Christian Sports Academy, Class of 2024 - A guard that likes to get down court once he is has the opportunity to fly by and uses his speed to his advantage. Is a player that likes to drive to the hole and will attempt to score when the lane is open and will also go strong to the basket. When his opportunity to score is cut off, he will look to facilitate passes to teammates who are open and cutting towards the lane.

Youssouf Singare 7-0, Forward, Our Saviour Lutheran High School, Class of 2023 (University of Connecticut commit) - A forward that will find plenty of ways to stay open in the low post. Is a force with his shot blocking ability and is fearless when it comes to obtaining rebounds. Although he is known for his ferocious ability to throw down dunks, he also has a nice hook shot and has added a jumper to his repertoire.

Christian Jones 6-4, Shooting Guard, Our Saviour Lutheran High School, Class of 2023 (George Washington University commit) - A guard that has the ability to create offensive opportunities for himself in a variety of ways. Has a penchant for making strong drives to the basket and is fearless when going up for two. Is able to step outside and shoot from three-point range, where he can cause damage to the opposition if not heavily guarded.

Ty-Laur Johnson 6-1, Point Guard, Our Saviour Lutheran High School, Class of 2023 (University of Memphis commit) - A guard that finds ways to make an impact on a game, even when he is not scoring. Has a good feel for the game and will take opportunities to make shots when on the court. Despite his size, he is not afraid to go up for rebounds and then go out on the break.

Jahmere Tripp 6-6, Forward, Our Saviour Lutheran High School, Class of 2023 (Fordham University commit) - A forward that is known for his strength, but is also a player that can definitely do what is required at any moment. Is able to use his physicality to get rebounds and has a good eye for steals, as he looks to get downcourt or pass the ball when on the break. Never hesitates to go up strong for a basket.

Jakeel Registe 6-6, Shooting Guard, Our Saviour Lutheran High School, Class of 2024 - A guard that provides instant offensive whenever he is on the floor. Has a penchant to obtain steals and drive to the basket. Has a nice shooting touch from outside and has the ability to use his athleticism on both ends of the floor, especially when obtaining rebounds.

Armoni Zeigler 6-4, Shooting Guard, Our Saviour Lutheran High School, Class of 2023 (St Peter’s University commit)- A guard that knows how to involve his teammates when he has the ball in his hands and will sacrifice scoring opportunities so that they can score. When he does score, he will take good shots and plans to make good baskets.

Amari Evans 6-5, Small Forward, Our Saviour Lutheran High School, Class of 2025 - A forward that gives plenty of energy when he’s on the court. Plays tough defense on the opposition and is active with his hands, as he will block shots. When he goes up to score, he will take plenty of chances with his shot and will even drive to the basket.