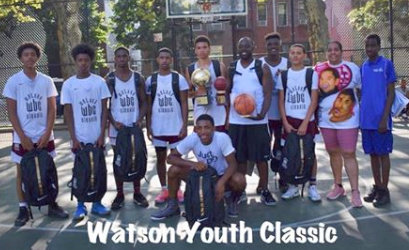 This Tuesday and Wednesday, Recruit the Bronx paid a visit to the Watson Basketball Classic in the Soundview section of The Bronx as they were in their second week of summer play action. Here are the standouts for this week’s action:

DJ Watson, 6-6, Shooting Guard, Roosevelt High School Uptown Elite, Class of 2019 – Watson has plenty of strength in his game and has a killer instinct whenever he steps on the court. Looks to get rebounds and is fearless and is very fearless when going to the hole, which allows him to absorb physical contact.

Justin Mazyck, 6-4, Shooting Guard, Stevenson High School, Uptown Elite, Class of 2019 - Mazyck showcases plenty of toughness when driving to the hole. Makes plenty of effort when it comes to getting to the basket. Has the ability to shoot from long range.

Travon Mack, 5-9, Point Guard, Stevenson High School, Steve-O, Class of 2020 - Mack is very quick and deceptive when it comes to getting to the basket. Is a guard that knows where and when to direct his teammates on offense and has good hands on the defensive end.

Greg Layne, 6-3, Forward, Stevenson High School, Steve-O, Class of 2020 - Layne can run the floor well and knows how to hustle. Plays aggressive in the low post and is very mobile. Good at getting layups and scoring at will. Great attacking the glass for rebounds.

Bismark Nsiah, 6-6, Forward, Lehman High School, Marksmen, Class of 2019 - Nisiah has a long wingspan and is very strong in the low-post. Looks to block shots every time the opposition is in the lane. Very strong at obtaining rebounds.

Trent Lomax, 6-1, Shooting Guard, Eagle Academy-Harlem, The Nation, Class of 2020 – Lomax has plenty of toughness and confidence on the court. Looks to score at will every time on offense. He is a dangerous shooter from long range and is always able to get to the basket easily. Has a long wingspan and is able to use that on the defensive end.

Rashawn Clemente, 6-3, Shooting Guard, Stevenson High School, Steve-O, Class of 2020 – Clemente has plenty of quickness and finesse in his game. Loves to shoot jumpers and is great at attacking the basket and usually slices and dices to the basket. Has a penchant for facilitating to his teammates.

O’Zhell Jackson, 6-7, Forward, Stevenson High School, Steve-O, Class of 2021 - Jackson is very skilled on the court and has plenty of length and can do plenty of things on the courts. Great for bringing the ball up the court and is great for handling it on the perimeter. Is also good at passing the ball to his teammates.

Khalil Brantley, 5-10, Point Guard, Nazareth High School, Terry’s All-Stars, Class of 2021- Brantley is able to distribute the ball to his teammates easily. Is able to get to the basket with efficiency. Knows where and when to make good passes, but also can slice and dice his way into the lane.

Julien Souamoro, 5-11, Point Guard, Cardinal Hayes High School, Terry’s All-Stars, Class of 2020 – Souamoro is a very speedy guard who likes to run on the fast break and has an affinity for scoring. He has great court vision on the floor. He is also a very defensive-minded guard who goes for steals against the opposition.

Max Amadusun, 6-10, Forward, Our Saviour Lutheran High School, Terry’s All-Stars, Class of 2020 – Amadusun makes a huge impact on the game with his size and athleticism. Good at blocking shots and grabbing rebounds in the low post. Is a physical presence in the paint and is very dominant in the paint on the offensive end.

Trey Clarke, 6-6, Forward, Brooklyn Democracy Academy, Dream Chasers, Class of 2019 - Clarke possesses plenty of skill and strength. Good at handling the ball on the perimeter and is wonderful at going to the glass and rebounding. Finds ways to get to the basket and showcases plenty of athleticism.

Phillips Joseph, 6-7, Forward, South Shore High School, Dream Chasers, Class of 2019 - Joseph is an imposing presence in the low post and possesses plenty of toughness. Is very energetic when it comes to getting rebounds and running the floor efficiently. Has the ability to shoot from long range.

Vernon Simmons, 6-3, Shooting Guard, Eagle Academy, Stay Woke/CTA, Class of 2020 - Simmons showcases plenty of skills and gives plenty of effort on the floor. Has a lot of athletic ability, but also finds ways to get to the free-throw line and can get to the basket easily.

Julian Arzu, 6-2, Shooting Guard, Eagle Academy, Stay Woke/CTA, Class of 2020 - Arzu has plenty of quickness and uses it to slash to the basket. Good at running in the fast break and is able to play a lot of defense. Has the ability to shoot from long range, but struggles with turning the ball over.

Stephon McGill, 6-2, Shooting Guard, Houston Prep Academy (TX), Stay Woke/CTA, Class of 2019 - McGill is very alert on defense and is always active on both ends of the floor. Is great at bringing the ball up and looks to score every time. Has the ability to shoot from long range.

Howard Turner, 6-2, Shooting Guard, Susan S. McKinney High School, Dream Chasers, Class of 2019 - A guard that is a dangerous shooter with plenty of range. Very good at staying open on the court and creating for himself on the offensive end. Finds ways to get to the basket and is always able to create for himself.

Damir Brooks, 6-5, Forward, KIPP NYC, Harlem All-Stars, Class of 2020 – Brooks is a forward who can handle the ball on the perimeter and also has a long wingspan and can move around the low post. Has plenty of athleticism and is a great rebounder.

Jamerie Shomo, 5-9, Point Guard, Bronx Prep Academy, Stay Woke/CTA, Class of 2021 – Shomo is a diminutive guard who is very active on the floor and plays very hard. Has the ability to score as he can get to the basket easily and gives his team plenty of energy.