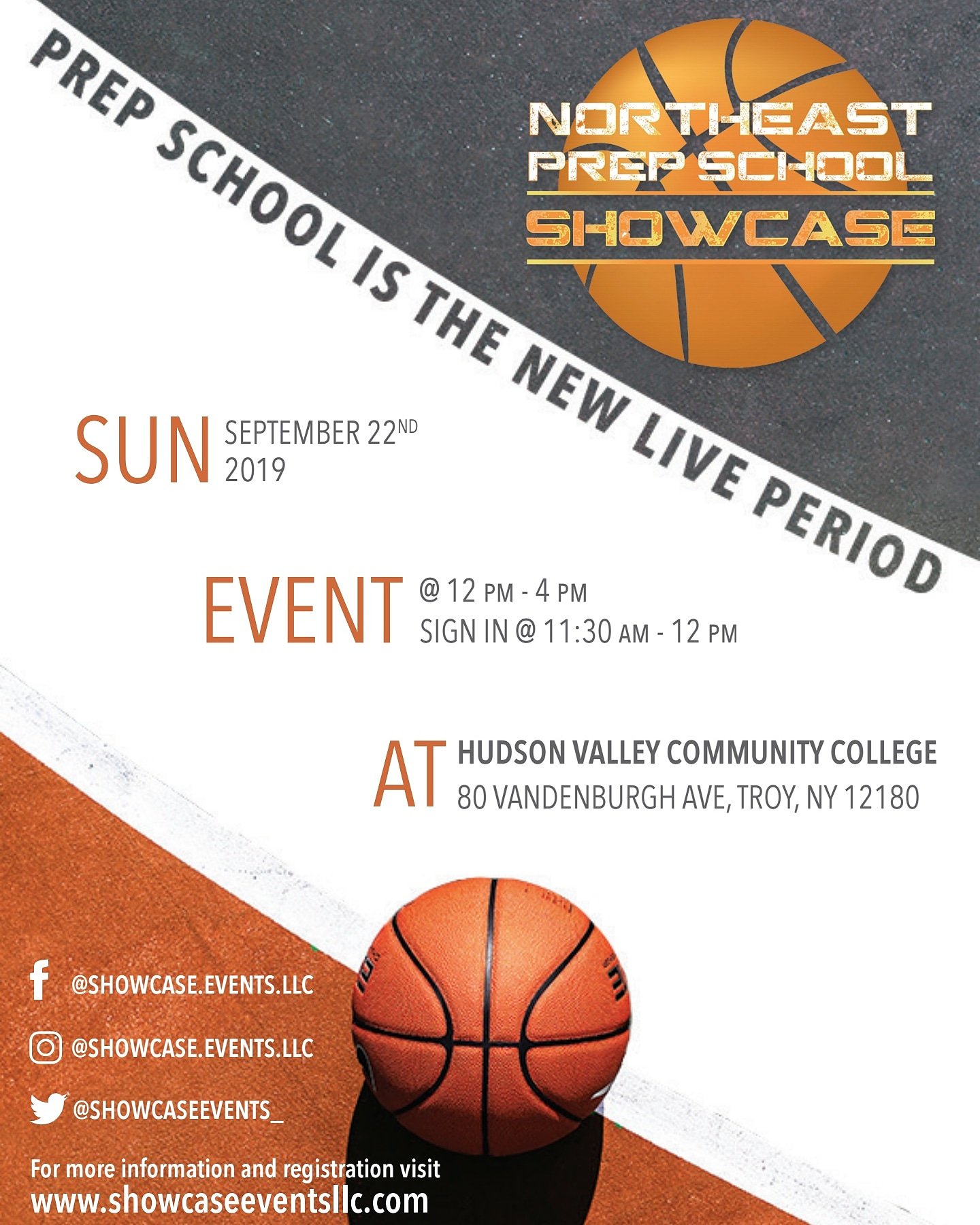 Below are the player preview snapshots for the 2019 Northeast Prep Showcase in Troy, NY on Sunday, September 22.

Jaden Ezomo (2020) 6’7 Forward, Nottingham HS - Syracuse, AAU Team: City Rocks -  Ezomo is a very athletic forward who can play with his back to the basket, stretch the floor knock down shoots from behind the line and has a good mid range game. He can also take defenders off the dribble and finish at and above the rim. Jaden is a strong kid who is not afraid to bang in the post and will guard centers from time to time.

Na’zea Fowlks (2020) 6’1” Guard. UPREP High School Rochester, NY.—-Athletic.  Good body with good length.  Lockdown defender who can guard multiple positions.  Good rebounder as a guard.  Makes big shots in big moments.  Will sprint past you with the ball or step out and knock down a three.  Great attitude.  Loves the game.  Although a 2020, he is still only 16.  Excellent upside.

Jackson Leone (2020) 6’1 Shooting Guard, Darien HS, AAU Team: Academic Basketball Club - Leone is long range sniper with significant upside. Physically, he is a very late bloomer, having shot up like a weed in the past two years. As his body and strength catches up with his frame, he will become a steal for a college program. In addition to the deep range, he is very crafty play maker off of the dribble, including the full complement of pumps, pivots and playmaking magic. His plan to do a Post Grad year will pay off.

Steven McCloud (2020) 5’5 Point Guard, Brighton HS - McCloud is a pure point guard, who has great vision on the court. He is quick, a good passer and can shoot the ball. 3.3 gpa

Kamerin Poromon (2020) 5’10” Guard.  Churchville-Chili High School Rochester, NY AAU—Brockport Ballers and NY Ballers.  Under-The-Radar prospect.  Comfortable on the point or at the 2.  Solid defender with a good jumpshot off the dribble or on the catch.  The lefty can also create off the dribble.  Good court vision.  Driven and determined.

Quentar Taylor (2020) 6’2 point guard, Trumbll HS (CT) - Taylor is a quarterbacking PG with a great ball handle, and also uses his sturdy body well to relentlessly attack the rim. Although not a shoot-first player, he can keep the defense honest by knocking down the open shot. His best attributes are his IQ, vision, passing and overall natural feel for the game.

Jonathan Beagle (2021) 6’7 Power Forward, Hudson Falls HS - Beagle has a blossoming inside/outside game.  He can bang down low with the best of them but can also step out and hit from the outside.  He is a mismatch nightmare.

John Blackwood (2021) 6’0 Point Guard, Schoharie Central HS, AAU Team: Cap City Scrappers - Blackwood is a threat to shoot or drive at anytime.  Play him too close and he’s getting to the rim or finding one of his teammates for a bucket.  Play off of him and you might as well count 3 in the book.  He is a do it all guard that makes any team he’s on better.

Everlasting Bornfreedom (2021) 6’0 Guard, Jamesville Dewitt HS - In addition, to having one of the greatest names to ever be found on a team roster, Bornfreedom is a lethal shooter, both from long range and off of the dribble. He is a quick combo guard who creates high quality shots for himself and his teammates. 3.5 gpa.

Brendan Coyle (2021) 6’6 Shooting Guard, Colonie Central HS, AAU Team: Albany City Rocks - Coyle was one of the star players for the City Rocks 15U EYBL team this year.  He was often the focus of the opposing team’s scouting report. Even though the other teams were keying on him, he still thrived and caught the eye of MANY college coaches.  Siena College has recently offered Brendan his first scholarship.  This will definitely not be his last.

Sean Fullerton (2021) 6’3 Point Guard, Wooster School (CT) A bouncy and hard working guard, committed to making his game as good as it can be . All Conference and All New England Prep as a sophomore. Very strong student.

Mazi Jackson (2021) 6’2 Combo Guard, Nottingham HS - Syracuse, AAU Team: City Rocks - Jackson is a sharp shooting guard who can attack and finish above the rim. He can find open players and break down a defense, and always guards the best players from other team. He currently holds a offer from stony brook with a lot of other schools starting to show interest.

Ricky Rollins (2021) 6’6 Wing, Mekeel Christian HS, AAU Team: Cap City Scrappers - Rollins is a long athletic wing who can shoot with the best of them! He routinely knocks down 3’s with ease from well beyond the 3 point line. With his athleticism and size, Ricky is just scratching the surface of his high level ability.

Aidan Lamothe (2022) 5’11 Guard, Stamford HS (CT) AAU Team: Academic Basketball Club - Lamothe’s rapid rise as a prospect is a reflection of his gym-rat’s love for skill development. Per his coach, “He is the kind of kid that just keeps moving up the rankings every year because he is in the gym every day adding to his skill set.” He is crafty and athletic in his ability to get to the basket and get the ball in the hoop. His defensive intensity and instinct also reflect his abiltiy to outwork the other guys on the court. Honor student.

Kristan Lewis (2022) 6’2 Guard, New Rochelle HS - Lewis is very strong and has good size for a guard, very bouncy and athletic. A college scout’s evaluation recognized his competitive will-to-win, ability to see the floor and ability to properly manage the pace of the game.

Miles Rose (2022) 6’3 Point Guard, Bishop Kearney HS, AAU Team: Albany City Rocks - Rose is the do-it-all guard that you want on your team.  He leads his team on offense and defense.  He will relentlessly attack the rim and score, but when left open, he will also knock down the jumper.  Miles’s older brother Quinton stars for Temple men’s basketball and Miles is well on his way to following in his brother’s footsteps.

Royal Brown (2023) 6’3 Combo Guard, Cohoes HS, AAU Team: City Rocks - Royal is a slashing scoring guard who gets buckets in bunches! He also routinely guards the best player on the other team. With offers from DePaul and UNLV his stock has nowhere to go but up.

Gianni DiCerbo (2023) 5’8 Point Guard, Albany Academy, AAU Team: City Rocks - DiCerbo is a pass first point guard that does all the little things to help his team win. He is a furious defender who guards his man 94’ and often ends up with steals.  Gianni is a floor general and can knock down jump shots and will only get better with time.