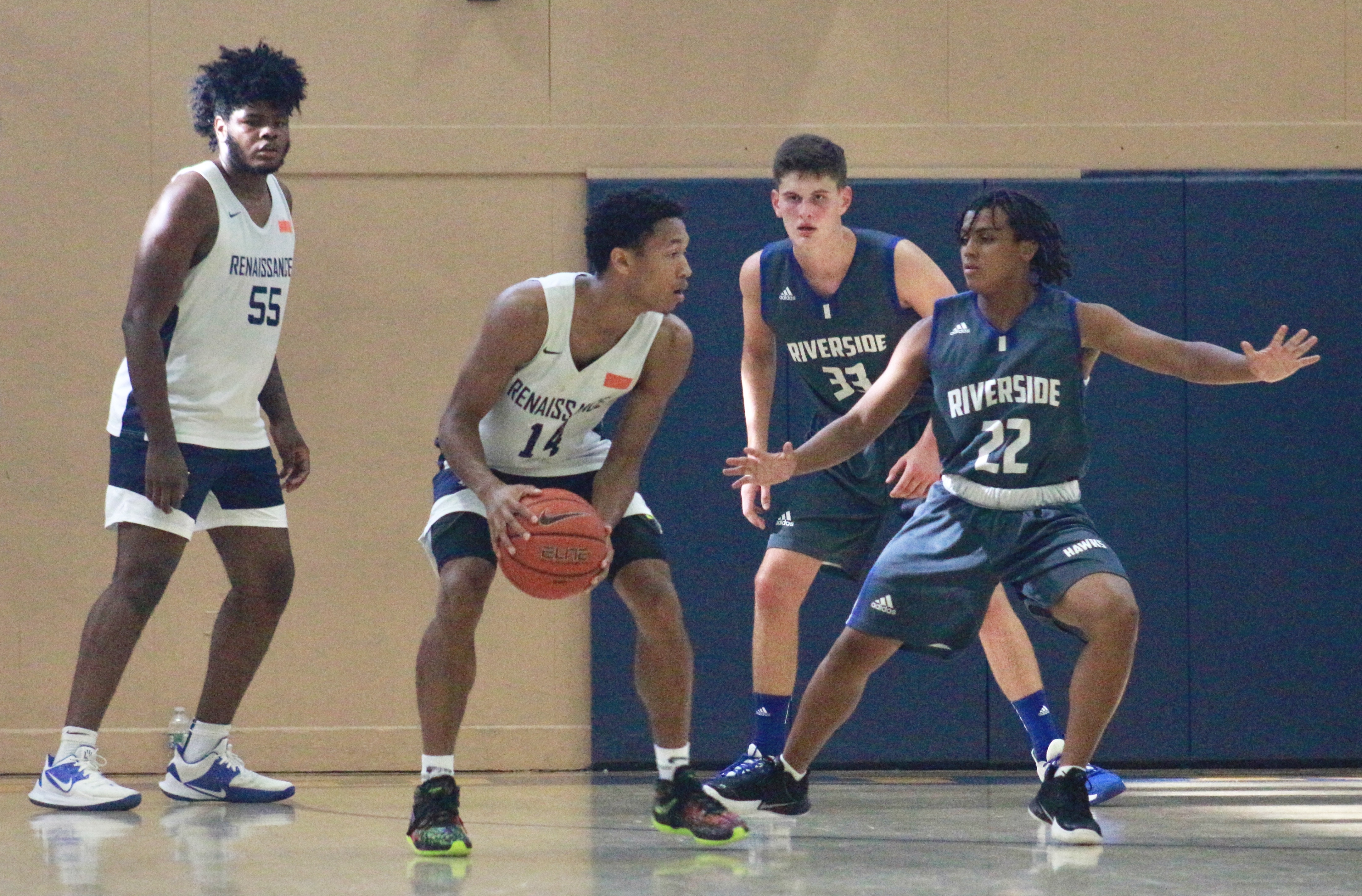 RecruitTheBronx.com made a trip to Mount St. Michael Academy in the North Bronx to check out two scrimmage games between the New York Rens and the Riverside Church Hawks. The 15u squads faced each othe in one run, and the 17u’s squared off in the other. Here were the standouts:

Jireej Cole (2023) 6-5 Forward, St. Raymond High , Riverside Church 15U - Cole plays hard and is very strong on the boards. Moves well on the floor and can post up his defender easily. He is a solid scorer and is very strong in the low post, does not back down when he gets a touch in the post.

Nick Padilla, (2023) 5-6 Point Guard, Dwight School, Riverside Church 15U,  Padilla is quick and persistent when it comes to playing defense. He is a good ball handler and is able to glide to the basket at all times. Has great IQ for his position and knows how and when to move around on the court.

Ta’Quan Woodley (2021), 6-7 Forward, Camden High School (NJ), New York Rens 17u - Woodley is strong and physical and has plenty of athleticism.He is able to block shots efficiently and can be a force on the glass. Is able to make his presence felt on both ends of the court.

Tyler Hawkins (2022) 5-8 Point Guard, Mount St. Michael Academy, New York Rens -Hawkins makes good moves to the basket and is known as a player that can create off the dribble. He has the ability to see where his teammates are moving so that he can pass them the ball and complete assists. He can also shoot from long range.

Dallas Anglin (2022) 6-0 Point Guard, Gill St. Bernard School (NJ) New York Rens - Anglin is a consummate playmaker and is able to create for himself offensively. Has plenty of athleticism in his game and finds many ways to score when he has the ball in his hands. He has great hands on the defensive end and is prone to getting steals.

Christian Bliss (2023) 6-1 Shooting Guard, Archbishop Molloy High School, New York Rens - Bliss is smart and hustles everywhere on the floor. He is a player that runs a team well and can give his teammates the ball when needed. In addition to being a good passer, he is also a player who can get baskets especially when needed.

Isaiah Earl (2022) 6-8, Forward, Christ the King High School, New York Rens, Earl has plenty of size and length and runs the floor hard. He is very skilled and versatile on both ends of the floor and can play above the rim. Is definitely a player that can be a defensive stopper.

Aaron Davis (2023) 6-6 Shooting Guard, St. Benedict’s Preparatory School, New York Rens - Davis can play both the two and three positions. He is a player that has plenty of energy and has hustle in his game. Gives his team plenty of spectacular effort on the floor. Finds ways to get rebounds.

Donta Greene (2022) Shooting Guard, Christ the King High School, New York Rens - Greene knows how to make the right plays when given the opportunity. He is very energetic when on the floor and has plenty of athleticism on both ends of the court, whether it is him getting the ball off the boards and also playing above the rim.

Chisom Okpara (2022) 6-7 Swing, Vermont Academy (VT), New York Rens 17u - Okpara can play three positions on the court and can handle the ball well when it comes to the offensive end. Loved to absorb physical contact at the basket and can get to the free throw line easily.

Will Groot (2023) 6-8,Forward, Hotchkiss School (CT), Riverside Church 15U, Groot is a foward that is good at handling the ball and driving to the basket.  He makes it a point to crash the boards and can also pass the ball at the right spots to his teammates. Finds multiple ways to score.

Caleb Crawford (2023) 5-11, Shooting Guard, Loomis Chafee School (CT), Riverside Church - Crawford is quick and shifty and can get steals when necessary.  He finds ways to get his teammates the ball and sees the floor well. Looks to find ways to score when he has the opportunity.

Ahmir Moore (2023) 5-11, Point Guard, St. Raymond High School, Riverside Church 15U - Moore is able to make great plays on the court and is able to distribute the ball to his teammates in a timely manner. He struggles with turning the ball over at times, but can see the floor well when his teammates are moving.

Taylor Perlmutter (2023) 6-0, Point Guard, LaSalle Academy, Riverside Church 15U - Perlmutter has good passing abilities and does not back down from any challenge that is given to him. He has a good jumper and is solid at getting to the hole when the opportunity is presented to him.

Lawrence Mitchell (2023) 6-1, Shooting Guard, Iona Preparatory School, Riverside Church - Mitchell plays with reckless abandon and has plenty of toughness in his game. He loves to play above the rim when on offense and can block shots when on the defensive end. Plays with plenty of energy.

Shamar Chester (2021) 5-11 Point Guard, High School for Construction, Riverside Church 17u - Chester is a consistent playmaker that can make plenty of hustle plays and also is good at facilitating to his teammates.  He sees his teammates at all times when it comes to them moving around the court. Is lightning-quick when he is on the break and can attack the lane and score efficiently when open.

Jayshane Woodard, (2021) 6-6 Swing, Wings Academy, Riverside Church 17u - Woodard is long and can handle the ball on the perimeter and uses his frame to post up on smaller defenders. He has the ability to attack the basket and create for himself offensively. Is also a good rebounder for his size.

Noah Best (2022) 6-4 Shooting Guard, Mount St. Michael Academy, Riverside Church 17u - Best does his best to make shots on the perimeter, but also knows when to pass and has a great IQ in his game. He never backs down from challenges on the court, when it comes to getting into the lane or taking good jumpers.

Javoy Thompson (2023) 6-5, Shooting Guard, Mount St. Michael Academy, Riverside Church 17u - Thompson is a guard who has plenty of size and length and can do many things on the court. He has a lot of athleticism and can use his length to snare rebounds and also finds ways to muscle past his defender to get to the rim.