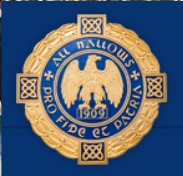 All Hallows High School competes in the Catholic High School Athletic Association Bronx Class A division and Coach Sam Alston is looking forward to having a promising season in 2020-21. All Hallows has five starters returning and three more players who will be key to the team’s success. The team has a unique situation where five players will be with the same coach for all four years at All Hallows. Alston was the freshman team coach two seasons ago. When he moved up last season, he took his best players from the freshman team and moved them up as sophomores for the experience and the long haul.

Below are the guys with key roles in the offense and are ready to turn the program around.

Jaden Kempson (2022) 6’1 point guard started last season as a sophomore. Now he has returned with a five inch growth spurt and some muscle mass. Kempson averaged 13pts and 7 assists last year and will definitely have a bigger role as one of the team’s leaders this season.

Julian Baquero (2022) is a wing guard started last season as a sophomore and is the team’s vocal leader with the highest IQ basketball IQ. Baquero is a crafty play maker that will create for himself and others. He is a two-way player, who operates at a high level on both offense and defense.

Seydou Traore (2022) is a 6’5 swing also started last season as a sophomore. He can stretch the floor with his mid range and 3 point shooting. Defensively, he changes shots and rebounds well. He plays above the rim in the open floor and a reliable free throw shooter. Traore can guard all five positions on defense and can play four different positions on offense.

Ryan Cabrera (2022) is a 6’3 forward started last season as a sophomore. He is another vocal leader who rebounds well on both ends. According to Coach Alston,  Cabrera does all the little things that contribute to big wins. He knocks down mid-range jump shots, offensive rebounds well, finishes around the rim, is a great free throw shooter, changes shots on defense, takes charges and is extremely effective in pick-and-roll as well as pick-and-pop actions.

Lenin Garcia (2021) is a wing guard who led the team in scoring last year. This is Lenin’s third season playing for Coach Alston. Lenin led Coach Alston’s freshman team to the AA conference finals. Now in his final year, Garcia plans to help lead the team to its ultimate success. He is crafty off-the-dribble, has a midrange game and can finish at the rim. Garcia can play the 1,2,or 3 position and can guard all three positions as well. He has interest from Queens College.