No Days Off - College Prospects 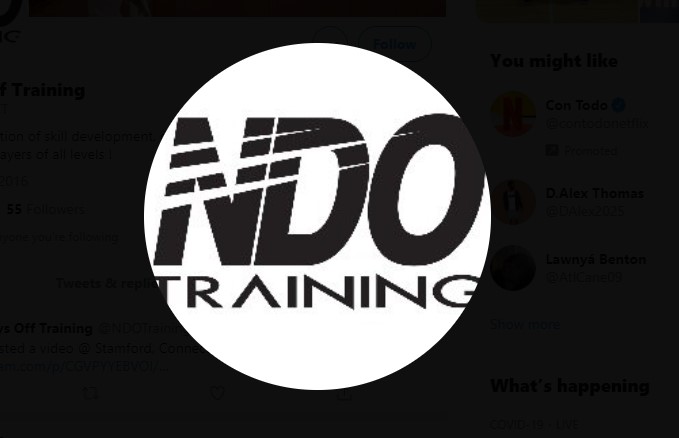 Led by former Divsion 1 player and professional player Steven Johnston, No Days Off Training LLC looks to provide knowledge, support and drills to help improve basketball skill and IQ. NDO strives to create a program that is affordable to all, but still provide a proper basketball education. Operating out of lower Fairfield Country, CT, NDO has tapped into a deep pool of talent who are willing to put in the work.

The following are college prospects in the NDO program, who are currently putting in the work to maximize their impact at the next level.

Ethan Okwuosa (2021) 6’3 point guard, Cheshire Academy (CT) Okwuosa has great size for a point guard, including a 6’7 wing span. Johnson says that Okwuosa is a gym rat, and one of the hardest workers you’ll ever meet. Has a very mature body, with elite athleticism. Smooth stroke from deep, and ever improving skill set. Johnson thinks best is yet to come for Okwuosa, and that he is only starting to tap into his potential. Okwuosa currently has low major offers, but Johnson thinks he is a mid major talent.

Jack Cyr (2023) 6’2 combo guard, Cheshire Academy (CT) Cyr is a smooth player, who has a great mid range pull-up and step-back shots. He is working on improving his ball handling to be able to be a more solid point guard. With three years of AA NEPSAC play ahead of him, he’ll gain the chance to flesh out those developing skills. Another area of improvement, the NDO has him focused on is being able to guard-on-ball better. Once he puts that together he should reach his scholarship level potential.

Brody Limric (2021) 6’8 forward, East Catholic High (CT). Johnson says Limric has incredible athleticism that he uses it well to attack off-the-dribble, catch lobs and rebound. NDO has been been working with him through out quarantine trying to improve consistency on his jumper. With that being said, Johnson say Brody’s best basketball lies ahead of him. With steady improvement with his ball handling and jumpshot, he has potential to become more of a 3/4 rather than a 4/5 where he is used on his high school team. Having already been offered by low majors, Brody definitely could get mid major offers this year, depending on team needs. Johnson feels that if he takes a post grad year, he’d definitely be a mid major player.

Cooper Limric 6’7 forward, Watkinson School (CT) - Cooper is Brody’s twin brother but has now reclassed and transferred to prep school at Watikinson.  Cooper may not be as exceptionally athletic as his brother but still has a solid body and is very strong. Cooper is an elite shooter with deep range. With still another two years left to develop, he defintiely has potential to be scholarship level player. He would excel at the D2 level, but could find himself on a low major that likes a lanky, long ball shooter

Jabari Jones (2021) 6’3 guard, Ledyard High (CT) - Jones’ strength is slashing and using his physicality. He is a very athletic, with the ability to rise up on defenders, and benefits from his long wingspan as well. Johnson says that Jones needs to improve his ball handling and consistency with jumper to be able to be considered a complete guard.  With a post grad year, he definitely could become a scholarship level player, most likely D2.

Lebron Maurice (2023) a 5’10 guard, Ledyard High (CT) Maurice is coming into his own, being still very young with time to develop. He is a lighting quick combo guard who can shoot it very well. He is working on learning how to play the point guard position. He is also still growing. Johnson says Jones has potential to be something good, but time will tell.

Jacob Hogarth (2024) 6’8 forward, Archbishop Stepinac. Hogarth has a major upside. NDO has been working with him for the past year, on his shooting, ball handling and footwork. He can guard all 5 positions, and getting stronger and is still potentially growing. To elevate his game, he needs to improve his ball handling, consistency on his jumper, improve athleticsm and keep improving his basketball IQ. He currently holds offers from Maryland and Creighton.

Jack Nieradko (2024) 6’9 forward, Kingswood-Oxford School (CT) Nieradko has a solid back-to-the-basket game and passing game. His jumpshot is solid with range out to the 3 point line. Johnson is directing him on building up his athleticism, that will come with maturity and proper training. He will also continue to work on the consistently of his shot, his foot work along with ball handle.  With four years to develop it, especially against the college-bound prep school competition that K-O faces, Nieradko is definitely on track to attract Division 1 offers.