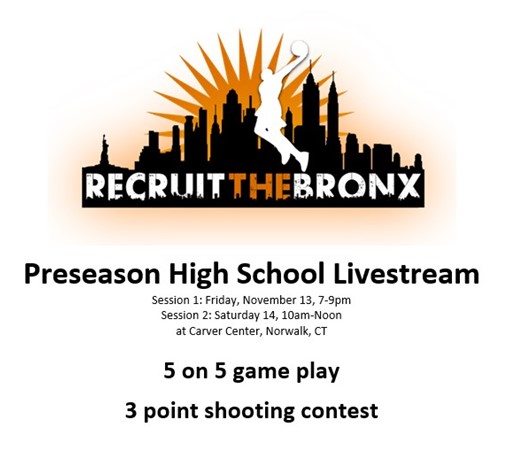 Jersey #2 Joshua Capellan (2021) 6’3 shooting guard, Fieldston School - Capellan is a fast and athletic wing with a well-rounded game. He consistently shoots from long range efficiently and can create for himself off of the dribble. He is a weapon in pick-n-rolls as well. His motor and speed help him excel on the defensive end, both on-the-ball and as a help defender. 3.5 gpa.

Jersey #3 Aliou Cisse (2021) 6’6 forward, Yonkers High, AAU Team: Purple Reign Warriors (Bilal). Cisse’s veteran AAU coach, Hassan Bilal sees him as a scholarship level player. Cisse is long, athletic and attacks downhill with aggression and purpose. He is a high flyer, with the ability to be a very good shot blocker and wing defender. He has the ability to handle in the open court for his size. Cisse is very coachable, and his potential is through the roof.

Jersey #4 Billy Wood (2023) 5’9 guard, St Francis Prep, AAU Team: Long Island Swarm (Jaques) - Wood is a consistent high scorer. He can score in multiple ways, including a good shot from mid-range and most spots on the floor.  He also has a good floater for scoring over taller opponents. His 3 point shot ability includes both catch and shoot and off the dribble releases. He also shows good decision making and playmaking ability and is able to take care of the ball under pressure.  4.0 gpa.

Jersey #5 Mehki Tyson-Slaughter (2022) 6’3 guard, Capital Prep Magnet School (CT), AAU Team: Connecticut Elite (Bentley) - Tyson-Slaughter is a guard that has the strength and physical makeup to play inside and out. He can guard multiple positions and he uses his explosive athleticism to rebound, block shots and attack the rim. Tyson-Slaugher has a high motor, solid ball handling skills and a good touch on his jump shot extending to the perimeter. He is especially dangerous in transition. 3.6 gpa.

Jersey #11 Mason Cottrell (2023) 6’1 guard, East Catholic HS (CT), AAU Team: Connecticut Elite (Moore) - Cottrell is a long guard who makes a living getting to the basket in transition due to his speed and physical play. Cottrell also uses his defense to create extra scoring opportunities for himself. He is very fun to watch due to the energy he brings to the game. Prep Hoops New England Top Player Ranking.

Jersey #12 Matthew Capellan (2024) 5’10 point guard Archbishop Stepinac High - Capellan is a fast and strong playmaking point guard who is able to create opportunities for himself and his teammates. He is a consistent midrange shooter, who can also drive to the rim. His on-the-ball defensive ability helps makes him a two way point guard. 3.3 gpa.

Jersey #13 Ben Miller (2024) 5’9 point guard, Trumbull High (CT)  AAU program: DTX (Taylor) - Miller’s strength is his very good three point shot with a quick release. He also has a very good ball handle and court awareness. He is very quick and has a good ability to get to the rim. Miller’s on-ball defense and ball pressure complement his offensive game very well.

Jersey #14 Tyler Riddle (2022) 5’10 guard, North Rockland High, AAU Team: Rebels Elite (Valentine) - Riddle is a strong guard with a high basketball IQ and is an exceptional leader who brings the team together.  He is able to position himself well on the court and on both sides of the ball.  As a guard, he is able to quickly identify opportunities for his team.  He takes high percentage shots, has game winning defense and is highly coachable.  Riddle is athletic with a solid frame and knows how to use his body.  He is solid off the pick and roll.  He does not give up; he has a strong will that his teammates rely on and can change the momentum of a game. 3.1 gpa.

Jersey #15 Jeremey Everlith (2022) 6’7 forward, Masuk High (CT), AAU Team: DTX Everlith plays well in the low post, he has a soft touch around the rim. He can also pop and hit jump shots. He is fast for his size and can run the floor very well. He sets good screens and can creates shot opportunities for his teammates. Everlith is very vocal while on the floor, which is impactful from his backline view point. 3.8 gpa.

Jersey #21Darrel Taylor (2024) 6’0 shooting guard, St.Mary’s High, AAU Team: Team NYC (Francois) - Taylor is a shooter that can space the floor and get to his spots. He’s a great rebounder for his position and plays both ends of the floor. Taylor has a high IQ for the game.

Jersey #23 Nahzeer Henry (2021) 6’0 guard, Capital Prep Magnet School (CT) - Henry is a great 3pt shooter and defender. He is decent around the rim. He likes to get the ball to the open guy and make tough passes, but also uses his sneaky jumping ability to put the ball in the basket. He crashes for rebounds to get put backs, or to start breaks from the defensive end.  He has great awareness on the floor, and gets the ball to where it needs to be. He is also not afraid to guard anyone on the court.

Jersey #24 Chris Acosta (2022) 6’1 swing, Ossing High, AAU Team: NY Extreme (Mowatt) - Acosta is a great defender and spot up shooter. He can effectively knock down the three ball and comfortably shoot off the dribble. He can attack the rim as needed. He provides great energy and can be a good secondary ball handler. He is also a threat in transition with his speed and athleticism. 3.2 gpa.

Jersey #25 Brandon Martinez (2021) 5’9 point guard,  Lehman Campus, AAU Team: Purple Reign Warriors (Bilal) - Martinez is a quick, aggressive and shifty lefty guard. He can handle in tight quarters and under pressure. He finishes at a high rate at the rim, has good court sense and an improving on the jump shop. Martinnez competes at a high level and has a high motor. 3.2 gpa.

Jersey #26 Yave Cruz (2021) 6’3 wing, Palisades Prep, AAU Team: Purple Reign Warriors (Bilal) - Cruz is a strong and athletic guard. He has the ability to shoot it from deep, and attack the rim with strength and effectiveness. When challenged, he can rebound and defend well at his position. 3.1 gpa.

Jersey #27 Boubacar Balde (2023) 6’2 small forward, Adlai Stevenson High - Balde is aggressive and plays to win. He focuses on doing what his team needs to win.  He prides himself on his lock-down defense, and his ability to guard 1 -5. He can hit from beyond the arc, attack the lane and create for his teammates. He grinds it out in the classroom as well as on the court. 3.5 gpa.

Jersey #31 Elijah Graig (2022) 5’9 point guard, Capital Prep Magnet School (CT), AAU Team: Connecticut Elite - Graig is a smaller guard with a good handle. He can effectively shoot from outside the perimeter and has a good touch around the rim with floaters over taller defenders. Graig can pass effectively with either hand and makes good plays on the court.  3.2 gpa.

Jersey #32 Malike Smart (2024) 5’10 guard, St Francis Prep, AAU Team: Team NYC (Francois) - Smart is an aggressive point guard that is very quick with the ball. He has a good midrange jump shot. He is not afraid to match up defensively against the best.

Jersey #33 Antwan Alexander (2022) 6’1 guard, Monsignor Scanlan High, AAU Team: Team NYC (Francois) – Alexander’s strength is that he is a strong finisher at the rim. He is athletic and smart on the court. He also creates shots for others and can knock down open shots. He is committed to playing defense.

Jersey #34 Ysaia Marte (2021) 5’10 guard, Harry Truman High, AAU Team: Mavericks (Taylor) - Marte is a great finisher around for the rim and can shoot the midrange jumper. He is aggressive and gives full effort, playing as if he has a chip on his shoulder and playing bigger than his height. He is also a good help defender. Great leadership, and he is a gym rat who loves to work at building his skill set. 3.4 gpa.

Jersey #35 TJ Chisolm (2021) 5’6 point guard, Salesian High, AAU Team: Back 2 Basics (Lloyd) - Chisolm is very quick, speedy and can facilitate the offense. He also can run the pick-and-roll and feed the big men. Chisolm knocks down his shots. He is great at receiving feedback and is a hard working player. He is the true definition of heart over height. 3.2 gpa.