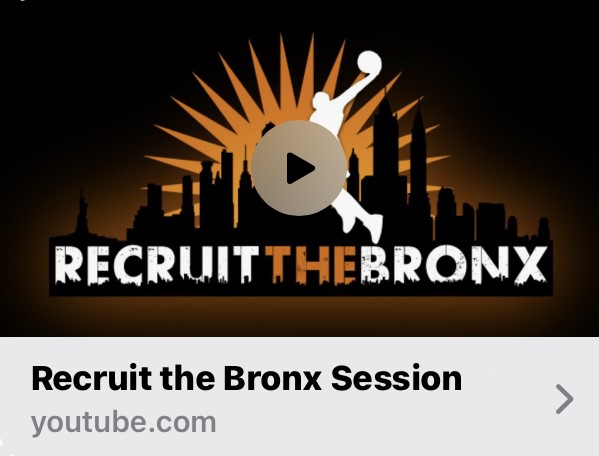 On Saturday, November 14, RecruitTheBronx.com hosted Session 2 of their High School Preseason Livestream showcase. The replay of the Livestream video of approximately 75 minutes of game play and the three point shooting can be found here.

Jalen Gordon (2021) 6’3 guard, Capital Prep Magnet School (CT) – Gordon looks like he belongs in a basketball uniform. He is a solidly built athlete which he uses to his advantage. He has an efficient and useful dribble move package. His quick first step off his effective set up pump fakes are a nice combo weapon. He shows that he is at home in the up tempo game, moves the ball with his head up and reads the up-court well. He moves the ball like a well-coached and unselfish teammate.

Chris Hough (2021) 6’1 guard, Capital Prep Magnet School (CT) – Hough brings a lot of physical gifts to the basketball court. He has length, athleticism and agility. When he puts those into a Euro-step move, he becomes a how-to video onto how to beat the rim defenders.  He hustles and can rack up points in run-outs and prevent run-out points going the other direction. He is an active close-out defender, who destroys shooters’ dreams.

Timari Rivera (2021) 6’8 Staples High (CT) – We project that Rivera is going to help make some hard working scout’s career. He is currently way beneath the radar for a talented 6’8 player. That is due both a previous lack of exposure and the fact that he is currently carrying too much weight. He has the un-teachables in D1 size and strength and a soft touch. Put this guy on a college level conditioning and diet routine, and a dominant player will emerge. He has strong low post seal technique, making him an excellent target and a scoring threat deep on the block. He also embarrassed a few “shooting guards” in this session by sticking his threes both in game play and beating them out for a spot in the 3 point shooting finals. His ability to draw a college-sized rim defender out of the paint, will inspire some offensive “coaching genius” at the next level.

Oliver Shevick (2021) 6’5 Fox Lane High, AAU Team: Riverside Hawks – Shevick has a solid body and uses it well. His finish-at-the-rim game included a useful, space-creating Euro-step.  He had a nose for rebounding and the loose ball, and was a thief in the passing lanes. He also added evidence to the theory that high academic homework-doers also do their homework in the shooting gym as well. I.e., he made the three point shooting contest finals as well.

Christian Sullivan (2021) 6’2 shooting guard, Massapequa High – Sullivan made the trip to Connecticut to show off a little Long Island moxie. His change of direction, pump and step-through game was fun to watch. He was foul trouble-causing problem. He was surprisingly effective as a rolling scorer of his ball screens. He exploited help-defense created gaps with timely off-the-ball cuts. His three point shot was pretty, confident and sent him into the contest finals.

Lenny Buddington III (2022) 6’1 guard, Christian Brothers Academy (Albany), AAU Team: City Rocks – The fact that Buddington drove in from over three hours away to show his wares, gives a pretty good indication of his desire to succeed.  He represented upstate New York basketball well. Excellent three point shooting not only got him to the finals in the 3 ball contest, it also set up his game-play effectiveness. His quick first step and ability to finish, made defenders have to “pick their poison” on how they choose to get beat by Buddington. His lefty finishes were surprising and too effective to stop.  He also showed a great sense of timing on his off-the-ball cuts.

Johnny McCain (2022) 6’1 guard, Trumbull High (CT), AAU Team: Connecticut Elite – It took less than five minutes of game play before the predominant defensive call from McCain’s opponents’ was a rather desperate sounding “shooter!”. McCain added to that notion by shooting close to 70% on 25 attempts in winning the three point shooting trophy. He flashed a bit of a floater game, which will serve him well in being a “shooter” at the next level. It can beat both the hard close-outs and he college-sized rim defenders that await him there.  He also ran the floor like a guy who enjoys winning basketball games. He did his best passing in finding his up-court teammates in transition.

Luke Nieman (2022) 5’11 guard, Cheshire High (CT), AAU Team: CT Titans – It was clear that Nieman is used to being the go-to scorer for his teams. His high activity off-the-ball movement and use of away-screens was proof of a guy who is used to getting points on the board. He was money from 3 in game play and took McCain to extra-innings on the 3 point shooting championship. He boxed-out and over-achieved as rebounder like a kid who is both coachable and really likes to win.  Nieman is fun to run with in transition because his head is up and he is finding you with the right pass when you shake loose.

RJ Neysmith (2023) 6’2 point guard, Holy Trinity Dioceses High, AAU Team: Rising Stars – Neysmith is a smooth operator. He is both a patient floor general and an attacking lefty slasher when the time is right. He can hurt you both with the drive-n-dish game, and the fake-drive and step-back pull-up jumper. He is also smooth and confident in running the break. His length and lefty lean creates problems for the right handers that he is guarding. Uses his length and quickness to pile up deflection stats.

CJ Fay (2024) 5’8 point guard, Notre Dame-Fairfield High (CT), AAU Team: Westport All Stars – Fay was a freshman playing in a session that was mostly running All Conference level upper classmen. He very much looked the part of a physically over-matched 14 year old…until game play started. He could not have done more to impress. He put his coach’s son’s understanding of the game to work in all aspects. The skills were fun to watch, except for the upper classmen grabbing their broken ankles from the nasty, low and elusive cross-overs.  He made the opponent pay early and often when left open from deep.