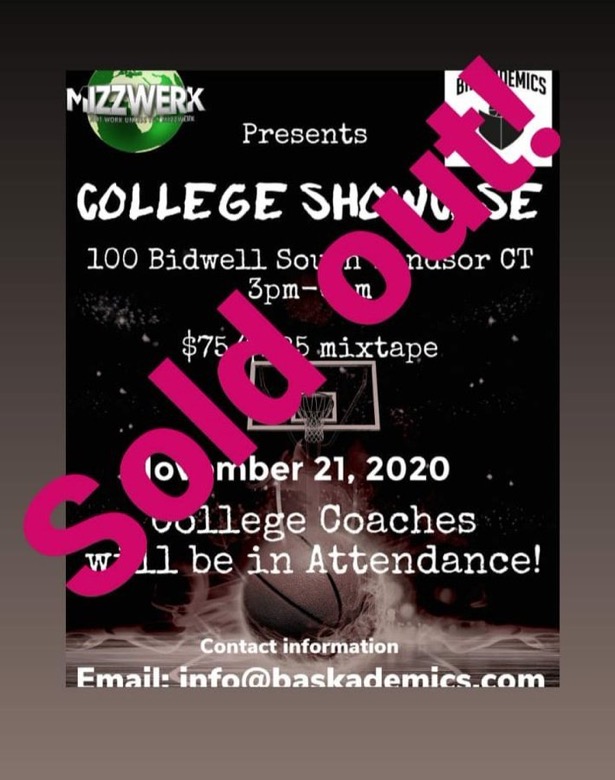 Landing on the final weekend prior to a two month Connecticut statewide shutdown on youth basketball, BASKADEMICS, in conjunction with MIZZWERK, sold out their College Showcase event. The event took place at Nomads, in South Windsor, CT. The opportunity was taken by players from Massachusetts, New York and Connecticut. As well as being livestreamed, they also played live in in front of DIII coaches. Here were some of the standouts:

Tre Duncan 6’0 guard, Sacred Heart High (CT) - Duncan has really transformed his game over the past three months. His confidence is growing and he is starting to play better with the ball in his hand.  Duncan made other players better and specifically impressed the Nichols College head coach who was watching courtside.

Dylan Crowley 6’4 guard, Gilbert High (CT) - Basketdemics director and veteran coach, Tobias Ceasar says there is not a better shooter in the state of Connecticut than Crowley.  He went 14 of 17 from behind the arc in his first three games of the showcase.  He is a lefty who can put the ball on the floor and has the good IQ to make other players around him better too.  Western New England Head Coach, Colin Tabb saw this all first hand, sitting front row. The day after, Coach Tabb secured Crowley’s commitment to play his college ball at WNE.

Roy Mckeithan 6’0 guard, Middletown High (CT) - Already committed to Roger Williams College, Roy showed up at the showcase just to get better and compete. He is a high IQ guard who can make shots. He will be an extension of the coach when he gets to Roger Williams.

Justin Gabriel 6’2 guard, Springfield Central High (MA) - Gabriel is an athletic guard who can also shoot the ball from distance. He is a fearless slasher who can score at all three levels.

Kyle Lombardi 6’4 guard, Holy Cross High (CT) - Lombardi showed his range from the 3 point line.  He is intriguing because of his size and length.  Lombardi was now rebounding and pushing the ball up the floor a lot better than back at the previous Basketdemics showcase this summer.  Ceasar says that Lombardi is hearing from a few colleges but is open to doing a prep year.

Jarrell Petteway 6’2 guard, Windsor High (CT) - Petteway can shoot off the catch as well as off the dribble.  He has good length, and so defensively, he gives opponents fits.  Petteway has worked on his game to become a three and D kind of player and the next level.

Luke Nieman 5’11 guard, Cheshire High. Nieman is a crafty guard who can make shots. Nieman’s game is smooth. The BASKADEMICS/MIZZWERK staff loved how he hard competed in drills and games.

Thomas O’Donnell, 6’1 guard, Longmeadow High (MA), the BASKADEMICS coaches remembered O’Donnell from their middle school event couple years ago. He has gotten bigger and stronger, but what hasn’t changed is his terrific ability to shoot the basketball.  O’Donnell made shot after shot, and when guys ran him off the line he was able to put the ball on the floor and finish at the rim.

Jonathon Pierce 6’5 wing, Sacred Heart High (CT) - Pierce is a long, wiry wing with an intriguing skill set.  The coaches in attendence loved how he competed and let the game flow come to him.  He plays with a good pace.

Que Duncan 6’4 guard - Sacred Heart High (CT) - Duncan is a big lead guard who can shoot the ball beyond 20 feet.  He is deceptively quick and can get to his spots.  The most impressive was, in a showcase style of play, he was still willing to pass the ball for others to score.  A true point guard!

Badara Diakite 6’9 forward, Redemption Christian Academy - Although only an 8th grader, this high ceiling big is already becoming a regular attendee to the BASKADEMIC showcases.  In just a few short months since he was last seen, Badara has started using his body to finish strong at the rim and carve out space for rebounds.  He also showed his perimeter skills which have vastly improved.  He projects to be a big time talent.

Julian Chatman 5’8 guard, MacDuffie School (MA) - Chatman is a shifty guard who is not afraid to mix it up with bigger players.  He is already shooting the ball now with range and has the ball on a string.  The potential is there for him to be the next big time guard out of Springfield, MA.