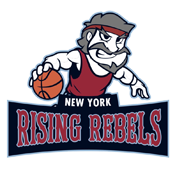 The NY Rising Rebels mission is to provide development and instruction to their student athletes. They look to help their players become better basketball players, but more importantly, better men and women. They use basketball as a way to teach responsibility and accountability. Through such guidance, their certified coaching staff prepares all NY Rising Rebels players both mentally and physically. They take pride in the betterment of their players. They provide advice and realistic goals for each player. All of the coaches are Volunteers, whose return is seeing their players succeed on and off the court.

The program runs year-round and enters each of their teams into exposure tournaments so the players can showcase their skills. Throughout the year, they travel and have at least six sleep-away tournaments, along with 20+ other local tournaments. They hold with practices, at minimum, twice a week. The amount of basketball that their players receive in a year or even just one season is very substantial. If you want to know more about NY Rising Rebels follow their Twitter account at @nyrisingrebels, or their Instagram account @NYRISINGREBELS or go to their website at nyrisingrebels.com.

The Rising Rebels have the following college prospect players in their program currently:

Aliou Cisse 6’6, forward,  Yonkers High School - Aliou is a pure athlete. He is capable of playing any position if needed. He is most comfortable playing the SF or PF position. With that said, he is able to handle the ball well and can go coast to coast under control. Aliou takes pride in his defensive ability to block shots and be a defensive threat and guard the opposing team’s top player. His length, wingspan, and strength allow him to get to the basket and finish with pressure on him. Aliou knocks down mid-range and 3 pointers, which creates opportunity for many And 1 situations. One of his strengths both as a player and as a student is being teachable, from coaching Aliou he has always been willing to learn, from myself and others. Aliou comes from a strict household, which I believe is why he is disciplined in everything he does and respectful towards everyone.

Yave Cruz 6’4 guard, Palisades Preparatory School - Yave is an elite PG who has the ability to control every game. His IQ is fabulous and understands that basketball is a game of different speeds. His size as a PG makes him a problem for his defenders and allows him to finish in traffic and draw fouls easily. Yave can knock down the 3 ball and hit clutch free throws whenever needed. Besides from being a PG, he can also play off ball and is always ready to catch and shoot or catch and drive and make the right play. Defensively, Yave is quick on his feet and able to go after loose balls and help his teammates rebound. A great strength of Yave is that he is unselfish and a hard worker who will push himself to better himself and his teammates. Overall, Yave is very coachable and would be a great fit in any program he may be welcomed to.

Messiah Bright 6’6 guard, Gotham Collaborative High School - Messiah primarily play SG/SF position and have the ability to make open and contested shots, finish at the rim and be a defensive threat because of his length and quickness. One of his strengths, both as a player and as a student, is his humbleness attitude and ability to listen and learn from his mistakes. Messiah’s a terrific young man, who always stays positive and never gives up. Lastly, Messiah takes pride in his work ethic. He is always the first one in the gym and last one to leave. He pushes himself to improve his game. Messiah is most definitely capable on providing a impact on any team he goes to.

Adrian Rraci 6’4 swing, Yonkers High School - Adrian’s IQ is what differentiates himself from most players. He is always aware of his mistakes and always corrects it. Has a great eye for the game and can always rely on him to make the right play. Adrian received many offers to play ball in college, however, he will be taking his talents to the College of Mount Saint Vincent. Adrian is a pure sniper, who can literally shoot the ball from anywhere on the court. His court vision and ability to make the unselfish play and get his teammates involved will allow him to play many minutes at the next level.

Joel Cruz 6’5 guard, Archbishop Stepinac High - Joel is athletically gifted! He already has offers from top Division 1 schools and looks to keep his options open going into his Senior Year. Joel is tough as nails! Joel never back downs from a challenge, he always wants to guard the opposing teams’ top players. You will never have to ask this young man for effort, every game he brings it! One of his best attributes is being vocal, once the game begins, Joel is talking, always calling out screens, helping his teammates. His game speaks for himself, he rebounds, he attacks the basket, can make contested/open shots, block shots. Overall great basketball player who has major upside to go places in his career. Besides being a ball player, he is a respectable young man who is coachable.

Manny Rodriguez 5’10 guard, Archbishop Stepinac High - High Motor Kid. He can run up and down the court and finish around the rim at ease. Can always rely on him to knock down the open shot and play hard defense. Major upside!

Deejay Benitez 6’2 guard, Riverside High School - Combo Guard that can defend any assignment. Very vocal and prideful amongst his teammates. Handles the ball well and also finishes around the rim. Loves to run on the breaks.

Marcus Garcia 6’2 forward, Archbishop Stepinac High - Not your most offensive threat, but is a defensive beast. He can guard any team’s best player and will do all the dirty work. Every possession you can find him boxing out and going after loose balls. Rebounds at a high rate and never needed to be asked for energy or effort.

Jayden Baez 5’6 guard, Saunders Tech - Jayden plays as th ultimate sixth man for his current Rebels squad. He brings insane amounts of energy off the bench. Very JJ Barea like. Can take and make tough shots. He locks up the opposing teams’ best guards. This kid has a huge heart and can be a top guard.

Javoy Thompson 6’7 guard, Mt St. Michael Academy - Everyone in the area knows Javoy’s athletic ability and how offensively gifted he is. In addition to that, he takes pride in being an energic defender and rebounder. Javoy, unlike most, understands the importance of defense and how you must play both sides of the court to be successful. Javoy ability to think for himself and make the right play is what really separates him from his competition. Javoy is nothing but Division 1 Material. He has fabulous work ethic and wonderful passion to always improve his game. He takes his academics serious and knows how important time management is being a student athlete. We have only known Javoy a short time and it is apparent with the right coaching and guidance, he will most definitely make a career out of this game. We are excited to see where Javoy’s Journey takes him and hope to continue being a part of it.

Kieran Webb 5’10 small forward, Iona Prep -Kieran is a 3 and D guy. He can drain shots from anywhere on the court. When you need some offensive power, he is your go to. His attitude is what makes him a dominant player! His fearless mindset to take on the opponent’s best defender is what separates him from others. He is the glue of the team. He keeps the energy high and shoots the ball at a high rate. Has major upside for the future!

Moudji Barry  5’10 swing, A Philip Randolph High - Moudji is a 14-year-old Lamar Odom! Ie. Not your average, young post man. He also has the ability to play any position needed. His handles are as good as a point guard and rebounds as a pure center. Moudji can knock down shots and never afraid to hold himself or his teammates accountable. Moudji is a player a coach never has to correct because you know he will correct himself.

Sekou Kourouma 5’8 guard, School of the Future - A high energy young man, who is never afraid of the moment. He can be a matchup nightmare because of his shiftiness and ability to pull up and hit a clutch shot or take his defender off the dribble. His offensive game is strong and can rely on him to make the right play. Great attitude and sense of humor!

Ryan Jackson 5’6 guard, Fordham Prep - Despite his size right now, Ryan is fearless once he steps on the court. Never afraid to drive the ball into bigger defenders, does not care if his shot gets blocked. His attitude is all about winning. No matter what it takes, Ryan is a Team player and will fit into any role that his coach appoints him. Whenever you need a spark, you can count on Ryan to knock down 3 after 3 and play hard furious defense.

Luke Gomprecht 6’0 small forward, Fordham Prep - Luke is a brute! He will run through a wall if needed! He never takes a play off and never needs to be asked for energy. He can run the floor, finish in traffic and has a nice jumper from inside and outside. Luke always has a positive attitude and never shy’s away from a challenge.

Asher Abeles 5’8 point guard, Iona Prep - Asher is a great PG with terrific handle and court vision. He is a fearless player with the ability to get to the rim, make pull up shots over taller defenders and play hard defense. His work ethic and dedication to improve is what separates him from other guards in his class. You can always find Asher working on some part of his game; either master a certain move in the gym, watching film, or in the weight room. Asher takes pride in the classroom as well maintaining a 3.5 GPA at Iona Prep. Asher is a player you can rely on to make the correct play and extra pass when needed.

Ozzy Diallo 6’2 guard, Yonkers High - Ozzy brings energy every day! Every practice and game you can count on him to give 100%. Being only a freshman, I see him becoming a top athlete in his class! He is vocal and always talks on the defensive end of the court. He prides himself in playing hard defense and has a fabulous mid-range game. With his length he gets to the rim and can finish over bigger defenders. Ozzy has a ton of potential and he will definitely be in the discussion as a top player as time goes on!