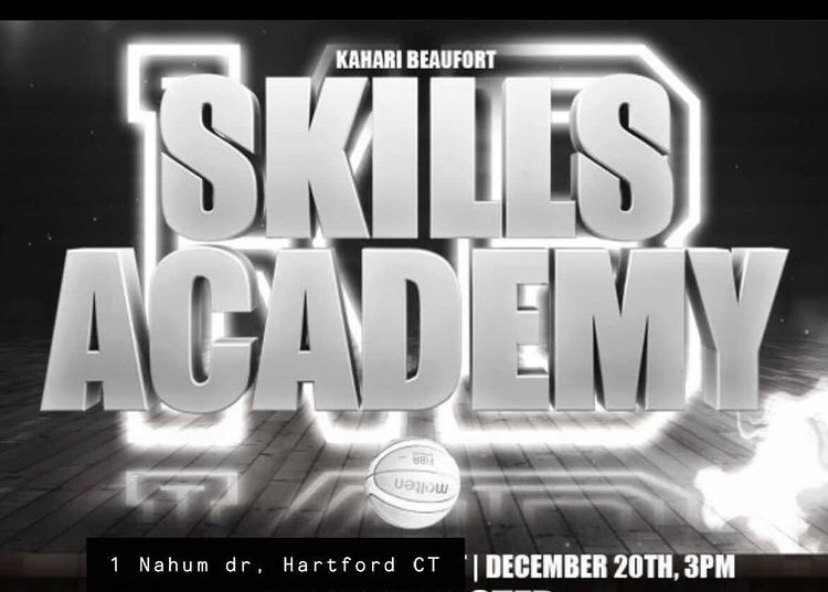 On Saturday, December 19th, RecruitTheBronx.com paid a visit to the Boys & Girls Club in Hartford, Connecticut to check out the Kahari Beaufort Skills Academy, which was a showcase for many of Connecticut’s best players and play in front of a livestream of coaches watching. Here are the standouts from the event:

Johnny McCain 6-1, Point Guard, Trumbull High School, Class of 2022 - A guard that is quick and deceptive with the ball and is very shifty when it comes to getting up and down the court. A guard that has great court vision and is able to see where his teammates are moving at all ends of the floor, so that he can distribute the ball to them and make sure they get scoring opportunities. Has a penchant for shooting from long range, especially when he’s not being guarded.

Matt Walker 5-9, Point Guard, Hall High School, Class of 2021 - A guard that is a player that can dominate the game when he has the ball in his hands. Knows when to take over the game with his offense and when to make sure his teammates get baskets. Is able to absorb plenty of contact in the air when he goes up for layups and has a huge penchant for scoring.

Gavin Griffiths 6-7, Shooting Guard, Kingswood Oxford High School, Class of 2023 - A guard that has plenty of size and versatility in his game and is able to control the game on the offensive end with his creativity. Is a player that has a lot of athleticism and loves to play above the rim, including catching putback dunks off of the rim multiple times. Has a nice shooting touch from three-point range.

Brody Limric 6-9, Forward, East Catholic High School, Class of 2021 - A forward that is very powerful with his moves in the paint and is able to establish his presence well in the low post. Has a penchant for playing able the rim and can overpower defenders by throwing down thunderous dunks. Is able to attack the glass with his rebounding efforts and is able to get blocks.

Jack Nieradko 6-9, Kingswood Oxford High School, Class of 2024 - A forward that has plenty of versatility, but is known for his post play around the rim. Has a great motor and is known as a rim protector on the offensive end and can attack the glass when it comes to rebounding and plays above the rim. Has a nice hook shot around 15 feet.

Desmond Claude 6-3, Shooting Guard, St. Thomas More School, Class of 2022 - A guard that can do a multitude of things when on the court, especially on the offensive end. Is able to move without the ball and knows when and where to anticipate the ball. Loves to drive to the basket and can attack the lane with precision.

Dashon Gittens 6-5, Shooting Guard, Woodstock Academy, Class of 2022 - A guard that can make plenty of moves with the ball, but can also do a multitude of things when on the offensive end. Has great defensive tendencies when anticipating the ball and is able to get steals and is very explosive when it comes to going up to the basket. Also, has the ability to shoot jumpers from long range.

Isaiah Earl 6-9, Forward, St. Benedict’s Preparatory School (NJ), Class of 2022 - A forward that has a long wingspan and runs the floor well. Is very skilled and is versatile on both the defensive end of the floor and the offensive end of the floor. Is able to put the ball on the floor and can make plenty of shots from the perimeter. Aside from playing above the rim, he Is definitely a player that can be a defensive stopper, as he is great at blocking a shot or altering the shot of the opposition with his hands.

Kazell Stewart 6-6, Forward, Lee Academy (ME), Class of 2021 - A forward that has plenty of strength and quickness in his game. Uses his wingspan to block shots and uses his aggression to get rebounds. Is a player that has a high-motor and is able to get to the rim with ease. His explosive first step aids in him getting to the basket with no problem.

Chase Collyer 5-9, Point Guard, Loomis Chafee School, Class of 2022 - A guard that is great at pushing the ball up the court and has great court vision when on the perimeter. Knows when to dish the ball to his teammates and is alert when dishing off passes to the players. Is able to glide to the basket easily and can attack the lane with his quickness.

Justin Covington 6-5, Shooting Guard, St. Luke’s School, Class of 2022 - A guard that is long and agile, but can handle the ball well and has good footwork. Has the ability to shoot from the top of the key, but is great at driving into the lane and can absorb physical contact when going up for two. Has the ability to be a great playmaker and is a very crafty player.

Hayden Abdullah 6-9, Forward, Northwest Catholic High School, Class of 2022 - A skilled forward that is able to do many things on the floor when he has the ball in his hands. Is able to push the ball up the court and get past defenders with his handle. Is able to shoot from long range, especially if open.

Elijah Wilborn, 6-8, Forward, Middletown High School, Class of 2022 - A forward that is skilled and is able to step out and shoot from the perimeter, as well as hold his own inside the paint area. Is able to move off of a quick first step and is able to get to the rim with ease. Has a good passing ability and can make sure that his teammates get opportunities to score.

Matt Curtis 6-3, Shooting Guard, Northwest Catholic High School, Class of 2022 - A guard that has a penchant of getting his teammates involved, but also has a knack for getting buckets as well. Has a penchant for shooting from the top of the key, and is great for shooting off the dribble. Is also able to get to the basket easily and finds ways to get to the cup.